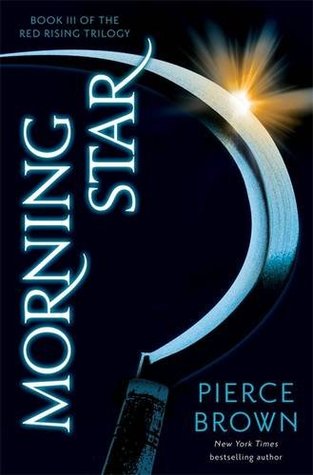 Darrow would have lived in peace, but his enemies brought him war. The Gold overlords demanded his obedience, hanged his wife, and enslaved his people. But Darrow is determined to fight back. Risking everything to transform himself and breach Gold society, Darrow has battled to survive the cutthroat rivalries that breed Society's mightiest warriors, climbed the ranks, and waited patiently to unleash the revolution that will tear the hierarchy apart from within. Finally, the time has come. But devotion to honor and hunger for vengeance run deep on both sides. Darrow and his comrades-in-arms face powerful enemies without scruple or mercy. Among them are some Darrow once considered friends. To win, Darrow will need to inspire those shackled in darkness to break their chains, unmake the world their cruel masters have built, and claim a destiny too long denied - and too glorious to surrender.

Now that, my friends, is how you conclude a trilogy. Morning Star is a bloodydamn marvel of a book and I can’t stop thinking about it. I laughed, I cried, I swore and I loved. I finished this book five days ago and have started some GRRM since, but even though my mind is in Westeros my heart is still in Lykos. It’s hard to believe that this is Pierce Brown’s first trilogy of books. They are so well written, so jam packed full of emotion and intelligence and I can safely say that I haven’t read anything else like it! For me, the most alluring thing about Morning Star is how much it made me think about war, human nature and how temporary everything is; how we’re all just a blip in the night but also how much we impact each other during the short period of time that we exist.


“In war, men lose what makes them great. Their creativity. Their wisdom. Their joy. All that’s left is their utility.”


Morning Star picks up several months after the end of Golden Son and things have definitely gone tits up for Darrow. Things start of so horrifically that I found myself cringing and wondering how he was going to get himself out of this situation. I found myself wondering where my favourites were gone and wondering what they were doing to help Darrow and the Sons of Ares. Things progress so quickly and I found myself savouring each page. I had no idea how Pierce was going to conclude this series and every chapter brought new surprises. Each character is developed even further and they are so well-rounded and fully formed that I find it hard to believe that they don’t exist (I actually glanced at the night sky at one point and played with the idea of Darrow and co residing up on Mars).


“Maybe that's just the nature of us, ever wishing for things that were and could be rather than things that are and will be.”


As always, Sevro steals the show for me. I adore everything that comes out of that guy’s mouth. I found it fascinating to see how Sevro would handle the death of his father and also how he would handle being Ares. His character showed so much depth and emotion. We get to see a whole new side to Sevro and it’s definitely a shock to read at first. He is so very human and feels so much despite his bravado. His and Darrow’s friendship is definitely my favourite fictional friendship that exists to date. I love how they bounce of each other, support each other, but also rough each other up. Tough love is ever present between them and their intellect makes for some comedy gold.


“If your heart beats like a drum, and your legs a little wet, it’s because the Reaper’s come to collect a little debt.”


Since finishing this trilogy, I’ve found myself saying ‘you need to read Red Rising’ to friends daily. This isn’t just pushing books. The thing that I found with this trilogy is that it is so damn relatable to everything that is going on at the moment. The corrupt politics, the unjust systems and hierarchical tendencies of our culture are all shown in these books. They are so gorydamn powerful and so, so emotional. Although this world is so corrupt, these books are so enjoyable and so easy to devour in one. I restrained myself with Morning Star and tried to make it last as long as possible. I was happy to stay in the world of Darrow, Mustang, Sevro and The Jackal. There is so much love and pain in these pages and it is such a captivating read.


Red Rising is one of my absolute favourite trilogies. Pierce Brown isn’t afraid to be brutal with his characters, he doesn’t shy away from anything and everyone is expandable. I think that’s one of the things that kept me on my toes throughout the entire series. I was always questioning what was going to happen next or worrying about which one of my favourites was going to be taken away from me (too many for my liking! *cries*). These books pack one hell of a punch and I can’t wait to see how the world develops in Iron Gold.
Posted by Unknown at 17:13