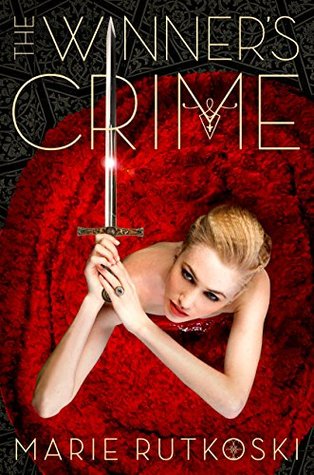 Lady Kestrel's engagement to Valoria's crown prince calls for great celebration: balls and performances, fireworks and revelry. But to Kestrel it means a cage of her own making. Embedded in the imperial court as a spy, she lives and breathes deceit and cannot confide in the one person she really longs to trust ... While Arin fights to keep his country's freedom from the hands of his enemy, he suspects that Kestrel knows more than she shows. As Kestrel comes closer to uncovering a shocking secret, it might not be a dagger in the dark that cuts him open, but the truth. Lies will come undone, and Kestrel and Arin learn just how much their crimes will cost them in this second book in the breathtaking Winner's trilogy.

I can't believe that this was my second time reading The Winner's Crime and my first time reviewing it! I loved this book so very much. The Winner's Curse was one of my favourite reads of 2014 so I couldn't wait to get straight back into this world in The Winner's Crime. Needless to say, my re-read of this book only solidified my love of this book and series. Marie Rutkoski's world building is so vast and rich in this series, and the second book intensifies the situation further. Kestrel and Arin are one of my absolute favourite will they/ won't they couples in YA and I couldn't wait to see where their paths would take them in this novel.

I love the world that Marie has created in these pages. Every chapter captured my interest and it is such an unputdownable read. I found myself feeling constantly terrified for Kestrel under the Emperor and constantly wondering when or if she was going to get caught out as The Moth. The political relationships that are built are so captivating and I found myself holding my breath on so many occasions. Nothing is shied away from in these pages. Kestrel encounters torture as a test, is constantly put into questionable situations and has some ruthless run-ins with Arin. These scenes constantly broke my heart. I just wanted to push them together and make them realise how much they mean to each other! The frustration was real, my friends.

The alternating point of views between Kestrel and Arin were so great for getting a clearer picture of the full events which unfold. This also intensified their relationship and all of its miscommunications to the point that I wanted to scream. The Winner's Crime is such a fantastic sequel to The Winner's Curse and I was happy to dive straight into The Winner's Kiss. If you haven't read this series, I really don't know what you're waiting for. It's a bright, shiny diamond in the sea of YA fantasy fiction.
Posted by Unknown at 16:00