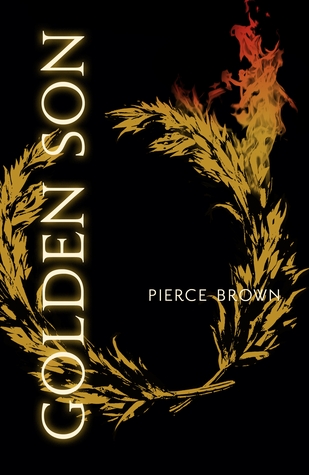 'I'm still playing games. This is just the deadliest yet.'
Darrow is a rebel forged by tragedy. For years he and his fellow Reds worked the mines, toiling to make the surface of Mars inhabitable. They were, they believed, mankind's last hope. Until Darrow discovered that it was all a lie, and that the Red were nothing more than unwitting slaves to an elitist ruling class, the Golds, who had been living on Mars in luxury for generations.
In RED RISING, Darrow infiltrated Gold society, to fight in secret for a better future for his people. Now fully embedded amongst the Gold ruling class, Darrow continues his dangerous work to bring them down from within. It's a journey that will take him further than he's ever been before - but is Darrow truly willing to pay the price that rebellion demands?
Hic sunt leones.
A life-or-death tale of vengeance with an unforgettable hero at its heart, Golden Son guarantees Pierce Brown's continuing status as one of fiction's most exciting new voices.

So I finished Golden Son last night… I still don’t feel fully recovered to write this review. Pierce Brown’s sequel to Red Rising is definitely something to behold. Golden Son is even darker, even more brutal and more compelling than the first book in the series and it has secured a solid place in the list of my favourite books. This book blew me away; I found myself devouring each chapter, eager to read on and see where the characters were going to take me next.

“I will die. You will die. We will all die and the universe will carry on without care. All that we have is that shout into the wind - how we live. How we go. And how we stand before we fall.”

I don’t think it’s always the best idea to write a review when you’re feeling so bloodydamn speechless from the ending of this book. Pierce Brown, you have a lot to answer for! My heart is broken and actually exclaiming ‘fuck’ and giving your boyfriend heart failure is definitely something to be proud of. Golden Son picks up a couple of years following the ending of Red Rising and it is so full of twists and turns – every chapter packs a punch and is full of surprises. Not knowing which characters to trust, or what was going to happen next really kept me on the edge of my seat. I couldn’t predict any of the things that happened in this book and poor Darrow went for one hell of a ride. I felt like I was standing right next to him throughout the entire book which made for one hell of an experience.

One of the many things that captivate me about this trilogy is the phenomenal world building and the intellect behind it. I have always been fascinated by Greek mythology and it’s clear that Pierce knows his stuff. The politics of the world are so dark yet not unfamiliar and I find myself comparing the British government with the Gold’s in almost every chapter. One thing that surprised me about this book was that I didn’t expect for so much of it to be set in space. I absolutely loved that element to it and I just feel like this world has so much depth and substance to it. It feels so very plausible and real and I can’t get enough of it. Golden Son is definitely a book which makes you think about your surroundings as well as what’s occurring inside the book itself – this is exactly what I want out of a book and it makes me so happy when it’s delivered.

“Home isn't where you're from, it's where you find light when all grows dark.”

I can’t get enough of Sevro. He makes me laugh so much and he is such a perfectly imperfect character. He’s so snarky, so full of cuss words, so funny but so loyal. I think he is definitely up there with my favourite characters of all time. His and Darrow’s friendship is such a joy to read. I love their interactions and I really felt like we got a better look at Sevro in Golden Son. It’s not just the world and Darrow that are evolving. Getting a closer look at The Jackal and The Sovereign was fascinating; they are such murky characters that I find myself savouring every morsel of information that we’re given. I feel like each character is developed so perfectly that I feel like I personally know them. I don’t know how Pierce manages to operate off of just one post-it note per character!

“Tradition is the crown of the tyrant.”

Golden Son was everything I wanted it to be and more. It was full of excitement, plot twists, plenty of characters to love and characters to hate. This is a trilogy that I cannot get enough of and I’m reluctant to let it go. There’s so much intrigue and emotion in these pages and they are unlike anything that I have read before. I am so glad that I could dive straight into Morning Star because I don’t know how I would have coped with that wait.
Posted by Unknown at 16:38