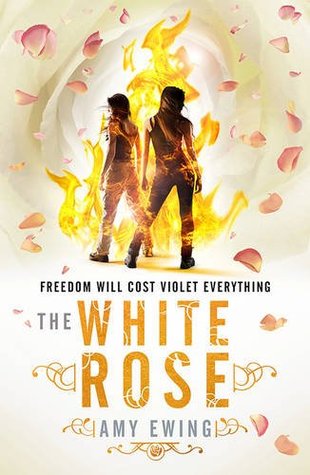 Perfect for fans of The Hunger Games and Matched, this is the second book in the Lone City trilogy, following on from Amy Ewing's shocking and compelling debut novel, The Jewel. Violet, Ash and Raven have escaped the palace of the Duchess of the Lake, but Regimentals are hunting for them across the city. Nowhere is safe, and they are dependent on Lucien and his secret society for survival. If they can reach the safety of the White Rose then Violet may be able to help Lucien in his plan to rescue more surrogates. For one surrogate, however, it is already too late. Violet's best friend, Raven, is pregnant. And in the Jewel, surrogates cannot survive giving birth.

I can't tell you how happy I was to sink back into the world of The Lone City. This series is something that just keeps getting better and better with each book. Following the hellish cliffhanger that The Jewel ended on, I was desperate to get stuck into The White Rose and find out exactly what was unfolding behind the scenes with the royalty and rebellion! The White Rose picks up right where The Jewel ended and we're thrown into the mania of Violet's attempt at escape. This was such a tense starting to a sequel and set the tone for the entire book.

I was so excited to discover more about the world that Violet, Ash and Raven live in and it did not disappoint. Amy Ewing has created such a three dimensional and fascinating world that it's impossible not to get sucked into it. I genuinely feared for the lives of everyone involved and found myself being constantly surprised by the events. The thing I loved the most was how much this series developed. The women;s powers are expanded and we are introduced to a whole new history of Violet and her ancestors. It's such and interesting read and I loved the connections with nature.

The way this world is woven together is magical. Plans to overthrow the royalty are expanded with so many twists and turns. I loved seeing Violet and Raven finally begin to come into themselves and to plot revenge and freedom. This sequel gives us such a great insight into these characters and I found myself horrified by who Raven had become thanks to the Countess of the Stone. Such good and evil characters created and I just can't get enough. Amy Ewing is one hell of a writer and it's safe to say that I will read anything that she writers.