Today Alexander Maskill, debut author and winner of the Terry Pratchett Prize to talk to us about the influences behind his protagonist, Zara.

However much I try to insist that The Hive Construct (out now in paperback from all reputable booksellers!) is an ensemble work, I can’t pretend I didn’t realise that people would gravitate towards de facto main character Zala Ulora. She’s capable, she’s deeply flawed but capable of growth, she’s enough of an outsider to the setting that the reader gravitates towards her perspective most easily of all the perspective characters, she collides with the setting’s various factions without being directly beholden to them, and her story arc carries most of the heavy lifting regarding plot.


In the abstract, Zala sounds like the most clichéd possible character for a nominally cyberpunk novel; the maverick chaotic neutral hacker. The empowerment fantasy offered by the ability to subvert the systems around you is common enough among the nerd set that, in the programming world, the term “hacker” has been stretched to mean “person who does anything, ever” just so that the maximum number of people can apply it to themselves. I had a bee in my bonnet about including hackers somehow, partially because it combined well with the core themes of transhumanism and partially because I’d just finished Parmy Olson’s “We Are Anonymous: Inside the Hacker World of Lulzsec, Anonymous and the Global Cyber Insurgency”. Taking in the stories of the actual people who fall into this sort of role drew the shortcomings of the typical archetype into sharp relief, and inspired me to do something different with the character.

My approach to Zala in this respect took inspiration from my own life; as I entered my twenties, I found myself reflecting on how I’d shed many of the subcultural identities I’d taken on as a teen, and it added to Zala’s character that she’d been forced into a state of arrested development. Her identity as a hacker was something she’d taken to as a teen and been forced to retain as a fugitive, even though under normal circumstances she would have outgrown it. She was a reluctant hacker, using her skills in the hopes that she’d be able to leave them behind and move on to the next phase of her life. It’s a subtle distinction, but reversing that role from an empowerment fantasy to something more complex helped me add a degree of complexity and a fresh perspective.

In terms of fictional influences, it only occurred to me months after submitting the manuscript that a huge subconscious influence on The Hive Construct was The Legend of Korra (potentially over and above the hipper influences I consciously integrated, such as The Wire and Ghost In The Shell), an influence which extends to how much of Korra herself is in Zala. Zala is definitely a distinct character – older, more world-weary and more aware of her limitations – but they share tremendous capability, an outsider status in their setting and a dynamic, ever-shifting relationship with the conflict unfolding around them. Korra’s a great character and I’m perfectly fine with Zala being in that sort of lineage. 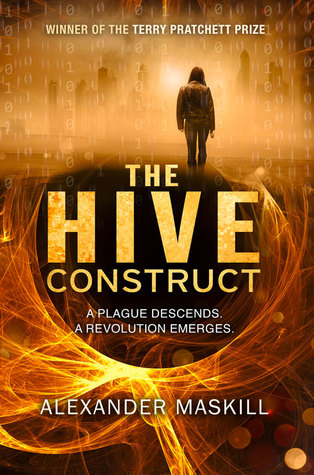 Winner of the Terry Pratchett Prize, a dark yet dazzlingly imaginative science fiction thriller by a furiously talented new young writer Situated deep in the Sahara Desert, New Cairo is a city built on technology—from the huge, life-giving solar panels that keep it functioning in a radically changed, resource-scarce world to the artificial implants that have become the answer to all and any of mankind's medical problems. But it is also a divided city, dominated by a handful of omnipotent corporate dynasties. And when a devastating new computer virus begins to spread through the poorest districts, shutting down the life-giving implants that enable so many to survive, the city begins to slide into the anarchy of violent class struggle. Hiding amid the chaos is Zala Ulora. A gifted hacker and fugitive from justice, she believes she might be able to earn her life back by tracing the virus to its source and destroying it before it destroys the city—or before the city destroys itself. With its vivid characters, bold ideas, and explosive action, The Hive is science fiction at its most exciting, inventive, and accessible.

ALEXANDER MASKILL is a 23 year-old debut novelist. He was born in Watford and grew up there and in East Sussex. Alex wrote the The Hive Construct – winner of the 2013 Terry Pratchett Prize – whilst simultaneously studying for his undergraduate degree at the University of Leicester. He is currently undertaking an MSc course in Computer Science at the University of Kent, and working on his second novel.
Posted by Uncorked Thoughts at 09:00