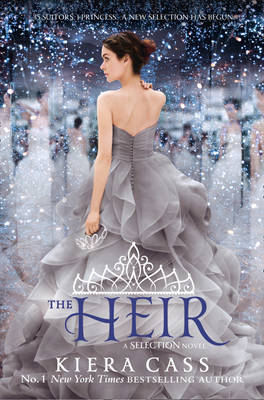 Kiera Cass's #1 New York Times bestselling Selection series has enchanted readers from the very first page. In this fourth romantic novel, follow Illea's royal family into a whole new Selection-and find out what happens after happily ever after.
Eighteen years ago, America Singer entered the Selection and won Prince Maxon's heart. Now the time has come for Princess Eadlyn to hold a Selection of her own. Eadlyn doesn't expect her Selection to be anything like her parents' fairy-tale love story...but as the competition begins, she may discover that finding her own happily ever after isn't as impossible as she's always thought. A new generation of swoonworthy characters and captivating romance awaits in the fourth book of the Selection series!

It has felt like a lifetime waiting for this book! I devoured the first three books in a short space of time and I was itching to lose myself in this world again. The Heir was very different to what I expected. It was so interesting to see the Selection process from a different point of view. Eadlyn is so uncomfortable with the situation and rightly so! It gave me such a deeper insight into how Maxon must have felt in the first three books and the difficulty of the situation on both sides.

The only thing that made me a little sad about this book was the lack of insight into America and Maxon. I wanted to read all about them again but this time the focus is on their daughter. I really wanted to read more about their love story but we're not given that insight. Eadlyn was a tough character to like at first. She was very spoilt and harsh, but the more I read the book the more she grew on me. She's so different to her mother and father; her prickliness makes her a unique protagonist and I was looking forward to seeing how things played out for her.

Kiera Cass has written another wonderful book in The Selection series. I can't wait to read the next one!