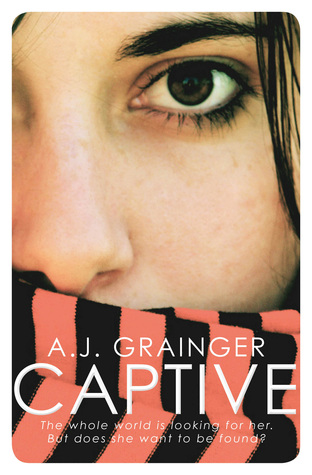 I open my eyes. The cell is flooded with sunlight; the window is a slice of pale blue. Dust particles dance in the sparkling light, pirouetting in a golden line from the window to the opposite wall of the cell, where they seem to converge into shapes. It is like looking into a kaleidoscope.

Dad isn't here. No one is, but me.
Robyn Knollys-Green is an A-list celebrity, famous for being the daughter of one of the world's most powerful men. But not even the paparazzi can find her now.
Robyn begins to realise that she is trapped in a complicated web of global corruption and deceit - and that the strange, melancholy boy who has been tasked with guarding her might not be an enemy after all . . .
A thrilling, well-crafted, ever-relevant story from a talented new voice in YA fiction.

Captive is a book that I've been excited to read for what feels like forever, It sounded so exciting and I never seem to get around to reading many YA thrillers - they don't seem to grab me as much. There was something about the back of this book that had me from the get go. I knew I had to read it. It didn't let me down. It was as complex, emotional and thrilling as I hoped it would be. I was excited to find out the motivation behind Robyn's kidnapping and how her character was going to be portrayed as a whole.

Although there were aspects of Captive that I felt followed a Thriller 101 Check-list, I still devoured it and would happily read more of A. J. Grainger's work. There was plenty of mystery and tension. On more than one occasion I felt genuinely terrified for Robyn; usually in the presence of Scar. I felt like this was such a plausible plot which definitely added to the enjoyment of the book. It isn't often that I read books from the point of view of a political family, but this one hooked me from the word go. I loved the unreliable nature of Robyn's father and I loved finding out some murky truths through her eyes.

One of the things I wasn't all that keen on was the romance element. It was all a little far-fetched for my liking. All I kept thinking was Stockholm Syndrome. It just didn't work for me at all. I don't know if that was what it was meant to be, but it just didn't sit right with me. I got that the motives of some people were more understandable than others,but at the same time it just didn't work. With the revelations that come out in the book, it really wouldn't work.

Captive is a nail-biting rollercoaster of a book. It was tense, exciting and definitely intriguing. I'm looking forward to reading more books by A. J. Grainger!
Posted by Unknown at 09:00