Today I have the lovely Anne Blankman, author of Prisoner of Night and Fog on the blog to share a couple of book cover secrets as part of her UK blog tour.

I have a confession to make--one of my favourite parts of the publication process is getting a book cover. Let's face it, covers these days are as gorgeous and elaborate as movie posters. Plus, there's something incredibly moving about seeing the book you've written captured in a single image.

So when I found out that Headline, my UK publisher, wouldn't be using my US cover but would create a new one, I got a little excited. Okay, I may have squealed. And pumped my hands in the air. Don't get me wrong--I adore my US cover. But getting to have two covers? That's amazing. And lucky me, I love both covers so much.

I also love learning the secrets that go into making covers, so I thought I'd share some of mine with you today!

Most people don't know this, but the US cover is actually a self-portrait. That's right, the model and photographer are the same person! I think that's why her expression feels so intimate. In a funny coincidence, her name is Anni, which happens to be my nickname!

Have you noticed the "Little Red Riding Hood" vibe in the UK cover? Well, in the 1920s, Adolf Hitler liked to call himself "Herr Wolf." After he became Chancellor, he liked to go around whistling "Who's Afraid of the Big, Bad Wolf?" The graphic designer, Bekki Guyatt, brilliantly captured that sense of a wolfish predator and his prey in the cover. And the shoutline... It gives me chills every time I read it.

The Blog Tour
Check out the rest of Anne's blog tour here: 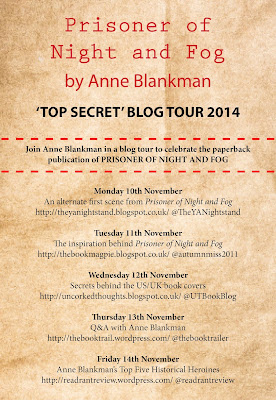 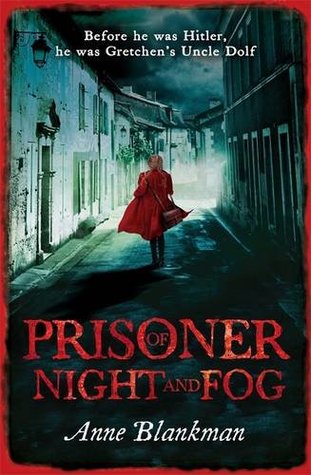 In 1930s Munich, danger lurks behind dark corners, and secrets are buried deep within the city. But Gretchen Müller, who grew up in the National Socialist Party under the wing of her "uncle" Dolf, has been shielded from that side of society ever since her father traded his life for Dolf's, and Gretchen is his favorite, his pet.
Uncle Dolf is none other than Adolf Hitler. And Gretchen follows his every command.
Until she meets a fearless and handsome young Jewish reporter named Daniel Cohen. Gretchen should despise Daniel, yet she can't stop herself from listening to his story: that her father, the adored Nazi martyr, was actually murdered by an unknown comrade. She also can't help the fierce attraction brewing between them, despite everything she's been taught to believe about Jews.
As Gretchen investigates the very people she's always considered friends, she must decide where her loyalties lie. Will she choose the safety of her former life as a Nazi darling, or will she dare to dig up the truth—even if it could get her and Daniel killed?


Which is your favourite cover?
Posted by Unknown at 09:00