Today I'm over the moon to be a part of Marcus Sedgwick's The Ghosts of Heaven blog tour. Marcus is here to chat a little about his latest spell-binding release!
Ghosts of the Insane Dead

The little inmates of the orphans’ home at Greenport, under the supervision of their matron, gathered a lot of wild flowers, and decorated the graves of the insane dead, who have been buried at the asylum cemetery. The deed was a worthy one, and to the little ones is given a great deal of credit for doing this act of mercy to the unfriended dead.
Those are lines from the section of Ghosts of Heaven called The Easiest Room in Hell, in which orphans place flowers on the graves of the deceased. I can’t take credit for them, they were something I came across during the research for this part of the book, which is set in what we would now call a psychiatric hospital, but which used be called an insane asylum. The terminology has changed over the years, and so has the nature of these establishments. In fact, the increasing use of medicine to treat those suffering from poor mental health has meant that there has been a permanent shift away from large institutions of this kind. And what this means, is that across the western world, there stand empty hundreds of former lunatic asylums (as they were known even longer ago, in less-enlightened times.) 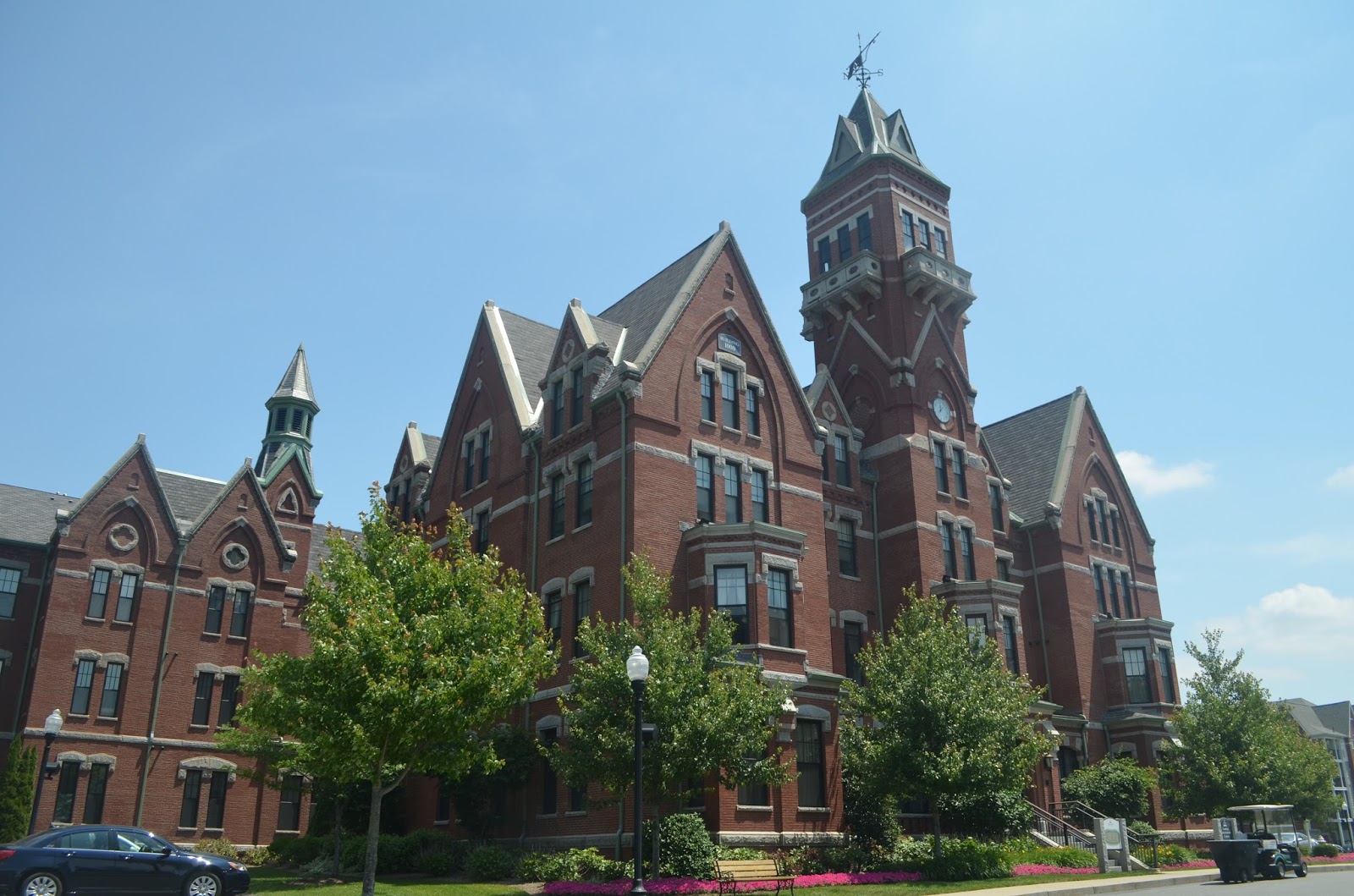 The remaining section of the Danvers State Hospital, MA

I became fascinated by one type of such a place; hospitals known as Kirkbride hospitals after Dr Thomas Kirkbride, an American psychiatrist who, in the middle of the 19th century, developed new ideas for the treatment of the mentally ill. It’s important to remember what the situation was like for most patients at the time – the ‘care’ of those with mental heath issues had barely stepped out of the dark ages until the work of people like Charcot and Luys in Paris and Kirkbride in the States. Up to this point, society saw the mentally ill as a problem to be dealt with by simply incarcerating the individuals concerned (in horrendous conditions), and that was more or less that; out of sight, out of mind. 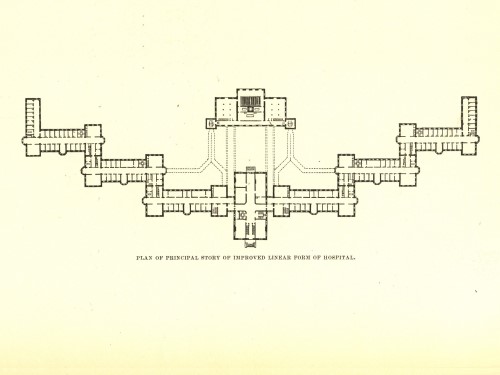 A typical floor plan of a Kirkbride hospital
Kirkbride’s idea was a bold one: he believed that the place in which these patients were kept was vital to their well being. He designed a new kind of building, every detail of which from the ground up was designed to help the inmates to recover their mental equilibrium. The sites were carefully chosen; often, like the ones I visited at Poughkeepsie and Danvers, set on a hill with inspiring views over the landscape. 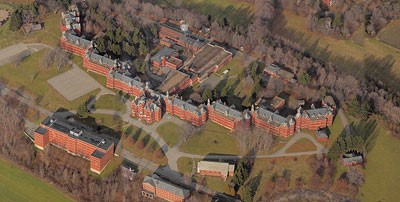 Danvers State Hospital before partial demolition. Witch-craze fans, a small snippet: from here you can see the spot at which the first of the Salem witch trials was held.
The buildings themselves were elegant, and airy, with wide corridors to allow plenty of natural light. But Kirkbride’s ideas didn’t stop there; he wrote a book, The Construction of Hospitals for the Insane, in which he details every single aspect of the construction and functioning of his buildings, all with one purpose in mind; to help the mentally ill get better. They weren’t just left to rot in cells any more, as in the past; they were encouraged to work, at whatever they could manage; in vegetable and fruit gardens, in workshops and so on. Kirkbride hospitals were enormous places, sometimes covering hundreds of acres; and ran like small self-sufficient towns in their own right, again, all part of Kirkbride’s plan to make the patient still feel like part of society, and not become increasingly alienated (the old French term for the insane was aliénées, for their doctors, aliénistes) by their time in hospital.
But time moved on. The use of psycho-pharmaceuticals increased, the patients were moved out. And the buildings? Some of them were demolished, though many have not been. This is an ongoing process, and one that many States have been slow to deal with. The extremely high costs of demolition have often prevented the State taking action. Some have been sold, turned into apartments, like the one above at Danvers.

Some are being preserved; at the time I visited, the old Oregon State Hospital (made legendary as the setting for One Flew Over the Cuckoo’s Nest, which was filmed there too) was in the process of conversion to a museum. 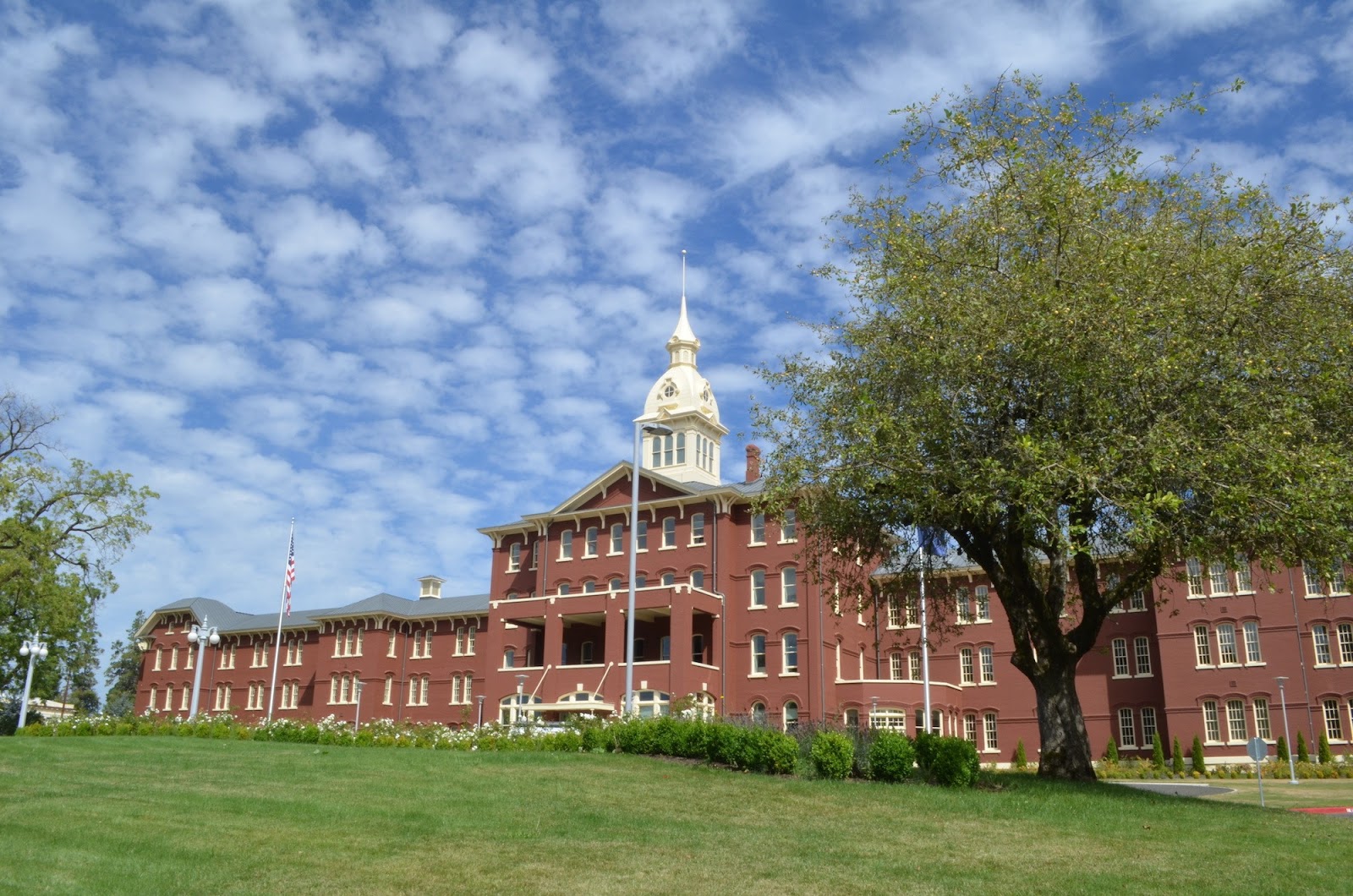 Oregon State, Salem, OR, now a museum
And still others remain, derelict, empty, visited only by the homeless, the urban guerilla photographer, and the occasional author. It’s hard when you walk around one of these places not to feel ghosts on every side. They are moving places to visit, and many people mourn their passing, feeling that at least a few more should be preserved as an important part of our social history.
If you’re interested, there are dozens of sites on the net devoted to the subject; the most authoritative being Kirkbride Buildings 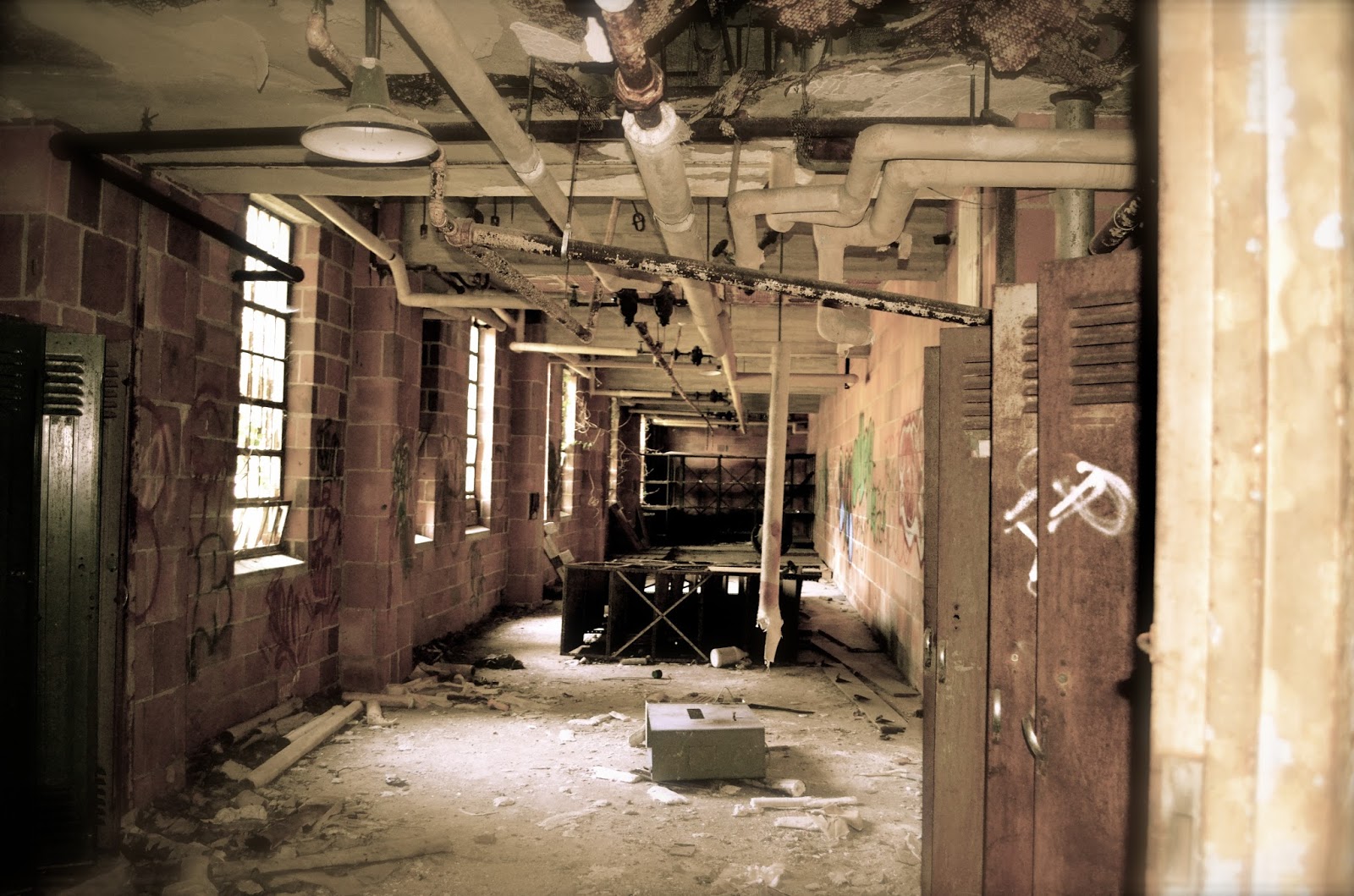 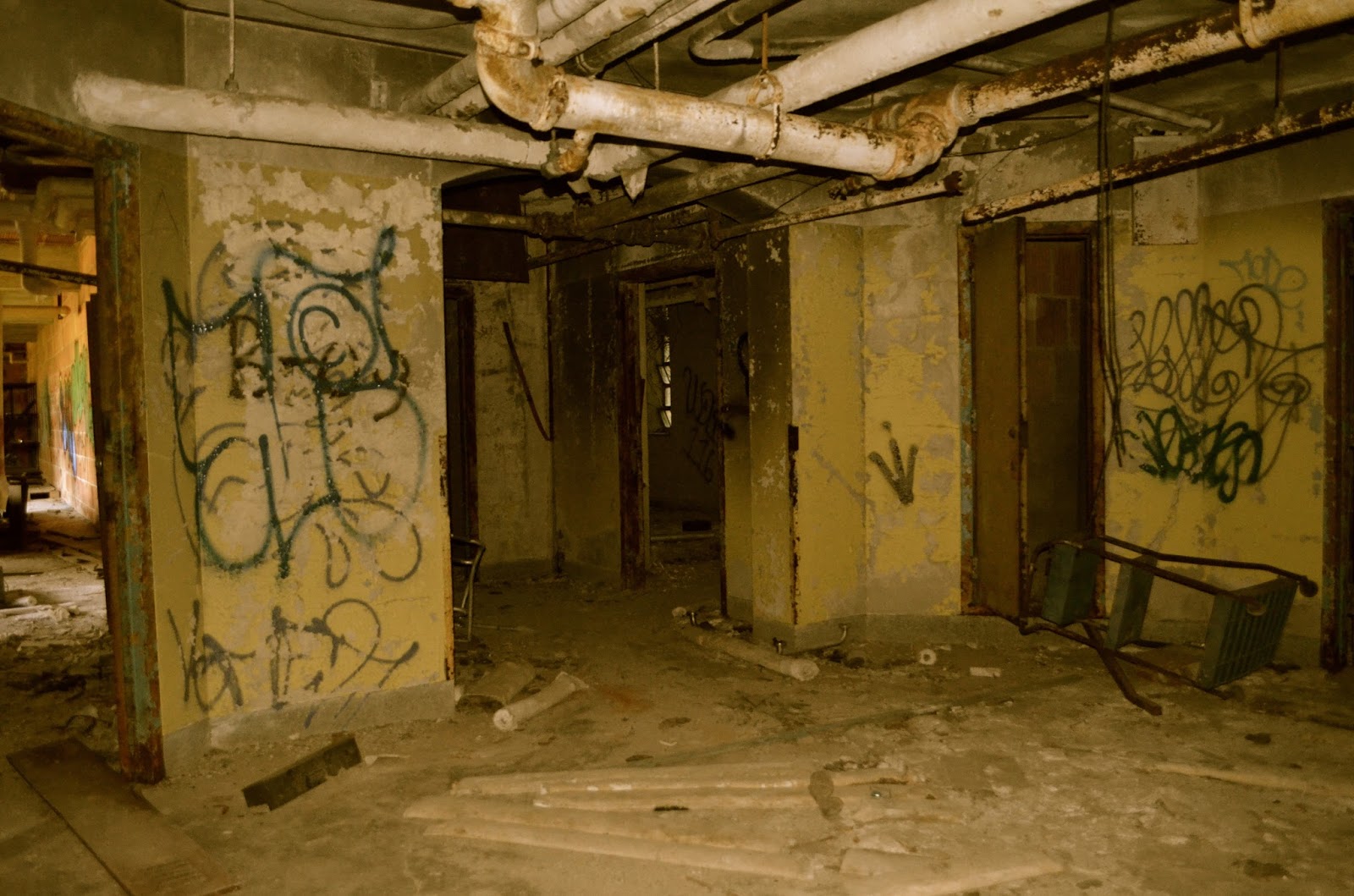 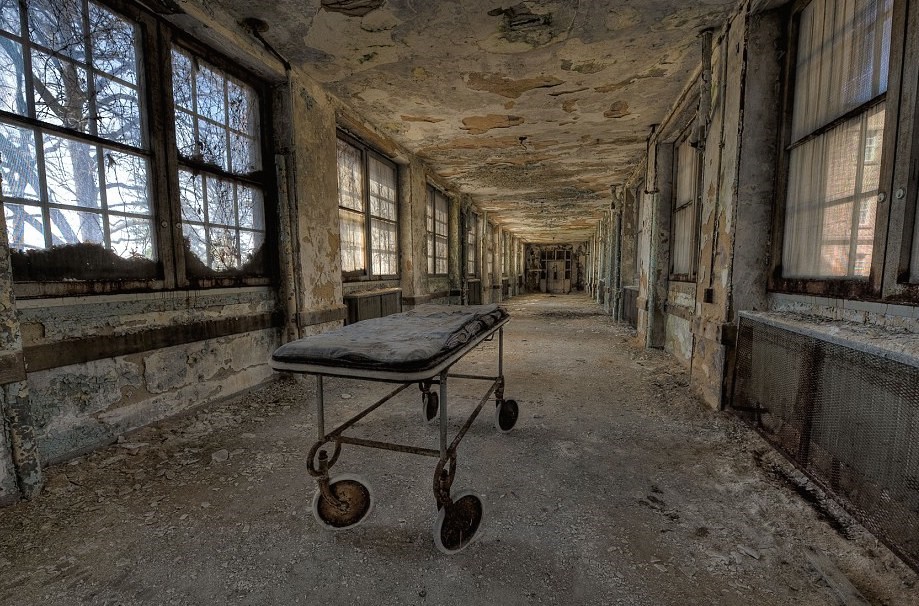 It's there when a girl walks through the forest, the moist green air clinging to her skin. There centuries later in a pleasant greendale, hiding the treacherous waters of Golden Beck that take Anna, who they call a witch. There on the other side of the world as a mad poet watches the waves and knows the horrors the hide, and far into the future as Keir Bowman realises his destiny.

Each takes their next step in life. None will ever go back to the same place. And so, their journeys begin...

a Rafflecopter giveaway
Posted by Unknown at 09:30