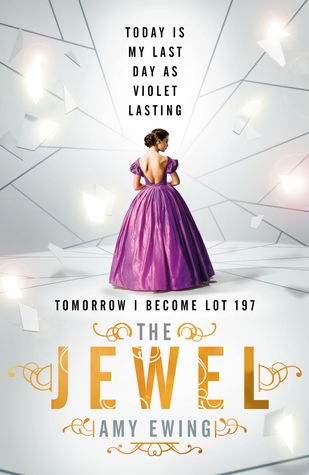 A shocking and compelling new YA series from debut author, Amy Ewing; The Handmaid's Tale meets The Other Boleyn Girl in a world where beauty and brutality collide.

Violet Lasting is no longer a human being. Tomorrow she becomes Lot 197, auctioned to the highest royal bidder in the Jewel of the Lone City. Tomorrow she becomes the Surrogate of the House of the Lake, her sole purpose to produce a healthy heir for the Duchess. Imprisoned in the opulent cage of the palace, Violet learns the brutal ways of the Jewel, where the royal women compete to secure their bloodline and the surrogates are treated as disposable commodities.

Destined to carry the child of a woman she despises, Violet enters a living death of captivity – until she sets eyes on Ash Lockwood, the royal Companion. Compelled towards each other by a reckless, clandestine passion, Violet and Ash dance like puppets in a deadly game of court politics, until they become each other’s jeopardy – and salvation.

If I could marry a book, this would be the book I'd marry. Just thought I'd put that out there. I LOVE THIS BOOK SO MUCH I DON'T EVEN KNOW HOW TO WRITE THIS REVIEW. I want ALL of the editions and all of the pretties and to conjure up Book 2 from Amy Ewing's brain to just read now. I've lost the ability to even. That's how good this book is. I don't think I've stared in horror at the last page of a book for the longest time like I did with this one. I just sat there like NO. YOU CANNOT END THERE. I FORBID IT. Worst bit is it's not even out yet! How long a wait is there for book 2, eh? Eh? Eh? Tell me Walker Books, tell me!

I'm just going to start this with a list of reasons for why you should all just drop what you're doing and read this book now:
And that's just the beginning. Seriously. I've not been so immersed in a world for the longest time. You know those books that actually make you pull faces? The ones that make you exclaim out loud, chew your nails in anticipation and throw it across the room in rage or frustration? That's The Jewel, but for all the right reasons. Violet is so captivating and her relationship with the Duchess is so toxic that you're constantly on the edge of your seat just waiting to see what's going to happen next. Emotions are flying everywhere and the events and characters just bound off the page. I swear I've been living in The House of Lake for the last few days and they have one hell of a ballroom.
Imagine being trapped in a world where a blood test can rule your life. Imagine being raised away from your family, hidden from your own appearance, forced to practise abilities which make you hurt physically, which make you bleed. Finally, imagine that at the end of all of this, you're bid on by the upper class of society, the royals, that you lose the right to your name and your only purpose is to bear the child of said royalty. To become a walking incubator. That's the life of the surrogate. This world is absolutely chilling and Ewing provides some shocking revelations as the novel progresses. Things that I didn't see coming and could feel my mouth hanging open from shock.
The Jewel is a beautifully written book. I am absolutely in love with it and I promise it will blow you away. I don't know when the second book will be out but it certainly won't be out soon enough! I have the biggest of book hangovers right now and I'm not sure anything will be able to get me out of it! This was one of my most anticipated reads of 2014 and it most certainly didn't disappoint. Now get off your computer and go read or preorder it!
Posted by Unknown at 10:00