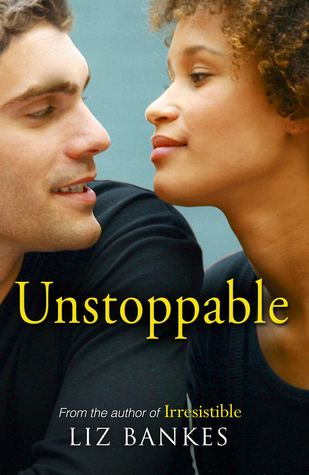 Rosie has managed to wangle spending the summer before uni in the same house as her boyfriend Cal – but who else should also be staying except for the infamous man-eater, Cleo.

Things between Cal and Rosie could never have been described as easy, but her growing jealousy seems like an unstoppable force. Can their love weather the storm?

*Received in exchange for an honest review*
*Thank you Piccadilly Press*

This genre is a little out of my comfort zone. Books similar to Unstoppable aren't ones that I usually read. I can't usually stomach a book which is based on a relationship, but something about this book jumped out at me and I'm really glad that I received it for review. Unstoppable is such an adorable read, filled to the brim with emotions and events which we can all relate to. Similar things have happened to us all relationship wise at some point. With this book being a companion novel to Liz Bankes other works, I'm definitely excited about picking up the other two!

Unstoppable follows the socially awkward Rosie as she begins her internship in Oxford and experiences living with her boyfriend Cal for the first time. There's only one problem. Cal has recently gotten a new housemate; the beautiful Cleo with the reputation for being a man-eater. I just knew this was going to be an entertaining and emotional read. There were so many sad and emotional moments accompanied by many laugh out loud moments. I was so intrigued by so many different characters; who was Cleo writing to in her letters? What was Cal up to? What was this mysterious supervisor up to? I devoured it and promptly passed it on to a fellow blogger to share the love!

Rosie is such a real character. She's someone I could completely relate to. In my teens I was painfully shy, timid and very awkward around so many people - thankfully this has changed now! (Thank you, university). Rosie worries about absolutely everything and this was something that was so similar to me. I loved her! The relationship between her and Cal is adorable and my heart broke for them so many times. Unstoppable is such a cute, quick read. It's perfect for some light summer reading. I highly recommend it - a book you can easily devour in one sitting!
Posted by Unknown at 14:12