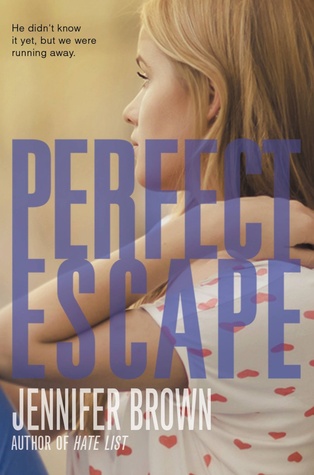 Kendra has always felt overshadowed by her older brother, Grayson, whose OCD forces him to live a life of carefully coordinated routines. To Kendra, the only way she can stand out next to Grayson is to be perfect, and she has perfection down to an art -- until a cheating scandal threatens her flawless reputation.

Behind the wheel of her car, with Grayson asleep beside her, Kendra decides to drive away from it all -- with enough distance, maybe she'll be able to figure everything out. But even in the midst of the road trip's flat tires, gas-station food stops, and detours to quirky roadside attractions, eventually Kendra must stop running and come to terms with herself, her brother, and her past.

I knew this was going to be a tricky read. I've yet to read a novel from the point of view of someone who is living with someone with mental illness, so I expected to either feel empathy or to feel blood boiling anger at the protagonist. What I didn't expect was to feel a bit of both. Kenda has grown up aware of her brother Grayson's severe OCD. As a result of this, she is filled with resentment towards her brother and is forced into believing that she must be perfect in order to make up for what she refers to as Grayson's 'flaws'. As we begin the novel, things have gotten out of control for Kendra. She's done something incredibly risky and is about to be found out by the school and her parents so she does the only thing she can think of; she runs away with her brother.

My mood swapped between empathy for Kendra's situation and disbelief at her attitude towards Grayson. I felt like her reactions were pretty much spot on for a variety of people that I've encountered and haven't experienced mental health issues. Kendra displays moments of impatience and a refusal to believe that she couldn't just force Grayson out of his 'habits' that he'd developed over the years. She refused to acknowledge the difficulties that he was having wit day to day life, that his OCD was his way of ensuring that everyone was safe and as something which helped him see through the day. As the book developed, Kendra opened up more about her personal problems and began to grow in understanding of the difficulties that Grayson was going through.

Perfect Escape is a quick read, frustrating at times but also eye opening. It was different to read from the point of view of someone who has to live with someone with mental health issues. It gave me a better understanding of what it's like to feel a little helpless and frustrated. I wouldn't say I particularly liked Kendra as a character - she was incredibly self-centred - but it definitely made for an interesting read!
Posted by Unknown at 09:00