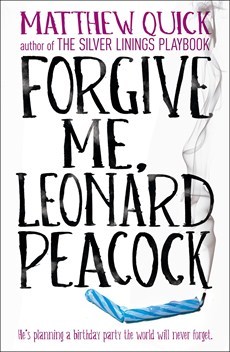 How would you spend your birthday if you knew it would be your last?

Not to his mum - who he calls Linda because it annoys her - who's moved out and left him to fend for himself. Nor to his former best friend, whose torments have driven him to consider committing the unthinkable. But to his four friends: a Humphrey-Bogart-obsessed neighbour, a teenage violin virtuoso, a pastor's daughter and a teacher.

Most of the time, Leonard believes he's weird and sad but these friends have made him think that maybe he's not. He wants to thank them, and say goodbye.

Forgive Me, Leonard Peacock is a book that I've heard so many brilliant things about. So many fellow bloggers have rated it so highly so I was really excited to start it. What started off as a really promising read soon fell a little flat for me, however. This is something I'll go into a little later in the review. Overall I found it to be a really interesting and emotionally draining read. There is something so captivating about Quick's characters. I was looking forward to seeing how things would play out.

From the first page I was completely captivated by Leonard's narrative. I wanted to know what had happened to him to make him feel the way he did. I wanted to know how he got to be in this situation and why he felt like he had no one to turn to. I had to so many questions that needed answers and I wasn't disappointed with the answers that I got. So much was cleared up and I found that I could sympathise with Leonard so much. He dealt with things that someone of his age should not have had to deal with. I liked that the story was entirely from his perspective. It allowed a lot of tension to build up and for the questions to remain open until Leonard chose to share them with us. I felt like we had to build up that trust with him to get to know more about his life and what had led him to these decisions.

Now onto the part I don't like writing. I didn't think much of the ending. I wanted more. I wanted to cry. I wanted to feel all of the feels for Leonard. It didn't happen. I don't know how to write this part of the review because of spoilers but I'm more than happy to talk it out with people who have read it. I expected more from the developments that came about. That being said, I still really enjoyed the book and I can definitely see why people love it. It depicts a very real struggle with mental health issues and I'm glad I've read it. It's the kind of book that I hope that people can read and feel a less of belonging. That they're not stuck out on their own; that others are going through the same thing. Overall a very moving and captivating read!
Posted by Unknown at 22:40