The lovely Natasha Harding, editor of J. B. Morrison's The Extra Ordinary Life of Frank Derrick, Age 81 has stopped by the blog today to tell you five reasons why you will love this wonderful and humorous book!

1.      The Extra Ordinary Life of Frank Derrick, Age 81 just so happens to be written by a complete star and a man who has a wonderful way with words – Jim Bob from Carter USM.
2.      The original title of this book was The 12 Days of Kelly Christmas. So Kelly had her name up in lights before Frank did! She is very much at the heart of the book and the charming cross generation friendship between Kelly Christmas and Frank Derrick is both heart-warming and poignant.
3.     This novel is filled with humour and reads like TV comedy gold. It reminded me of sitting down to watch the Two Ronnies or Victor Meldrew. There are so many wonderful one liners too – it’s the type of book that you can enjoy reading aloud to your friends or chuckle along to as you read on the train.
4.      Frank’s character leaps off the page from the opening lines of the book and makes you laugh. He makes you laugh because everyone knows someone a little bit like Frank.
5.      Frank is a character that you won’t forget in a hurry. When you finish this book you’ll feel like you have been to Frank’s flat, sat down in his cluttered living room and had a cup of tea and a biscuit well past its sell-by-date. 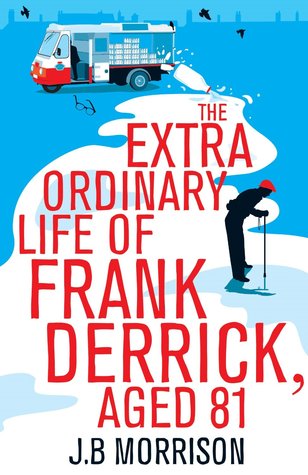 Frank Derrick is eighty-one. And he's just been run over by a milk float.

It was tough enough to fill the hours of the day when he was active. But now he's broken his arm and fractured his foot, it looks set to be a very long few weeks ahead. Frank lives with his cat Bill (which made more sense before Ben died) in the typically British town of Fullwind-on-Sea. He watches DVDs, spends his money frivolously at the local charity shop and desperately tries to avoid cold callers continually knocking on his door.

Then a breath of fresh air comes into his life in the form of Kelly Christmas, home help. With her little blue car and appalling parking, her cheerful resilience and ability to laugh at his jokes, Kelly changes Frank's extra ordinary life. She reminds him that there is a world beyond the four walls of his flat and that adventures, however small, come to people of all ages.

Frank and Kelly's story is sad and funny, moving, familiar, uplifting. It is a small and perfect look at a life neither remarkable nor disastrous, but completely extraordinary nonetheless. For fans of The Unlikely Pilgrimage of Harold Fry this is a quirky, life-affirming story that has enormous appeal. And it's guaranteed to make you laugh.

Purchase || Goodreads
Posted by Unknown at 09:00