Today we have the lovely Beth from Miss Inga Page to talk to us about Eating Disorders in YA. It's such an amazing post - I hope you enjoy it!

Now, as some of you might know (from me complaining about it on Twitter on, more or less, a daily basis), I am currently in full-blown thesis writing mode for my Master’s degree, where I am writing about representations of anorexia nervosa in Young Adult Fiction.

When I told Leah about this, she very kindly asked me if I would write a post for Mental Health Awareness Month, which is being hosted by both Leah and Ula throughout the month of June. Mental Health Awareness Month is being run with the hope of decreasing some of the stigma attached to mental health issues. So, for the entire month of June, bloggers have been writing posts, reading books and writing reviews, and just generally talking about the topic! You can even find them on Twitter: just search for #MHAMJune! 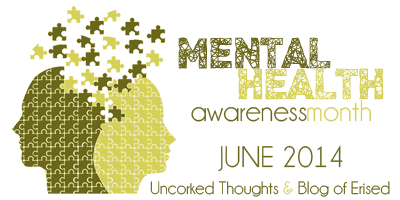 I’m going to say now… that I am not a psychologist. I am by no means an expert on the topic of eating disorders, and whilst I have done a lot of research for my thesis, I certainly do not know all that I could. I am a Literature major, after all, and am only in the beginning stages of my research. Therefore, I would like to preface this by saying that if you are affected by any of the issues dealt with in this post, please speak to someone: a family member, a friend, your doctor, or any of the many organisations that have been set up to support you, whether you are personally affected or if you are worried about someone in your life. I will include a brief list of organisations at the bottom of this post. Please remember that there are people out there who can help you. You do not need to face this alone, and it is nothing to be ashamed of.

To give you a little background, my thesis is (provisionally) on female representations of anorexia nervosa in realistic young adult fiction from 2004 to 2014. I want to look at the ways in which these representations are problematic: an idea which stemmed from my reading of Picture Me by Lori Weber earlier this year. Many of these texts utilise a first-person narrative style which draws the reader in and places them in the shoes of the protagonist. Additionally, they tell the reader how to lose weight, often in the style of some of the “Pro-Ana” and “Pro-Mia” online communities which are so frequently criticised by the media, and which can be so dangerous to read. The fashion industry has been criticised for glamorising women with very little body fat, and yet the literary industry has, seemingly, not been considered.  These texts may not have visual imagery, but they are readily available, and can still be incredibly powerful!

Having read a number of these novels over the course of the last month, I believe that there are some novels which handle the subject better than others. Depictions of eating disorders can be found in Young Adult fiction from every genre, and in both positive and negative ways. You can even look back at some of the “Classics” of English Literature and find characters who critics have argued are living with an eating disorder: Catherine from Wuthering Heights, for example. Whilst most of these texts are not problematic, the ways that they have been presented in texts from recent years are particularly descriptive and may, therefore, be more difficult to read.

Interestingly, almost all of these texts have been written by people who have gone into eating disorder treatment facilities themselves, and have, in many instances, been approved by various medical boards to say that they are not going to “trigger” anybody who reads them. Personally, I struggle to believe that this is true… In an interview with the New York Times in 2009, Laurie Halse Anderson (the author of Wintergirls) stated that she specifically asked the doctors whether or not there was anything in her book that could act as a “trigger” to her readers. On the topic, she said that: “The docs said, yes, this book is going to trigger people: turning on the television triggers people, looking at billboards, going to the computer, walking past a magazine rack. But the challenge in the book, that they felt I had met, was to show the entire story, and there’s nothing glamorous or lovely about an eating disorder. It’s horror.”

Whilst this is certainly true of almost all of the books that I have read, in that they present the full-story and show just how difficult treatment and recovery can be, the reader is still put in a position where the thoughts of the protagonist are put into his or her own head. With television, or the computer, or magazines, the individual retains a level of distance, which is taken away when reading a first person narrative. Therefore, whilst I disagree with censorship, I do believe that these books could be harmful to an individual.
You only have to look to Amazon and some of the lists of books that users have created to see that these books are being used as handbooks. One girl writes: “I have had an eating disorder for a while but I haven’t been reading books on it until recently. I had gotten the idea of reading ED literature when I found a reading list on a pro – Ana web site. I have long since finished all the books on the list and am now on my own in searching for more. Reading these books has helped me so much. I’ve gotten tips, motivation and many of the characters have become my role-models.” If this doesn’t show the power that these texts can have, I don’t know what does.

I suppose, it comes down to the controversial issue of issuing warnings alongside books. This is something which has been so prevalent in the book community in recent weeks, after US Students requested that trigger warnings be provided alongside their reading lists, to distinguish texts which deal with distressing topics. Many of the novels I have looked at for my thesis have a minor character as the person with an eating disorder. Reading the blurb of any of these texts would not alert a reader to the subject matter, and therefore allow them to make an informed decision about whether or not they feel comfortable reading about the topic.

Personally, I do not believe that these books should be censored, because they present a realistic insight into the terrible things that so many people must face every single day, and therefore raise awareness for these topics, and can help to decrease stigma. However, whilst I think that the reader should be able to make his or her own decision about what he or she reads at any given time, I think that this should be an informed decision. When the subject matter is not made clear to the reader before he or she begins, I believe it is much more likely that these books can act as a trigger to an unsuspecting individual.

Some of these books show the protagonist coping with an eating disorder whereas, in others, it is a friend or sibling. Some of these books are set in a world like our own, whilst others are dystopian or fantasy texts. Some show the eating disorder as the main focus of the novel, whilst in others it is a sub-plot. Some deal with anorexia nervosa, whilst others deal with bulimia nervosa or binge eating disorder. There are so many different ways of addressing this topic, and so it is impossible to say that they are all problematic, but that is something I hope to explore over the course of the summer!

If you want to read any of the books that I have looked at for my dissertation, here is a list of books that I read whilst preparing, with links to their Goodreads pages:

That said, I could only read a handful of novels in the time that I have available, and there are so many other texts which deal with eating disorders in some way! So, here are a few lists of books that you might want to look at, if the ones I listed above don’t interest you!

Thank you again to Leah and Ula for inviting me to take part on Mental Health Awareness Month. I have really enjoyed reading all of the posts that have gone up over the course of June, and feel honoured to have been a part of it!
If you have been affected by any of the topics discussed in this post, there are organisations out there to help you. Some of these include: NEDA (USA), B-Eat (UK), NEDIC (CAN), NEDC (AU) andBodyWhys (IE).

How do you feel about trigger warnings on books? Do you think that they should be included, or do you feel, like the lecturers in the US who are opposing this plea, that life does not come with trigger warnings and that readers should be prepared to be exposed to these topics unexpectedly?
Posted by Unknown at 09:00