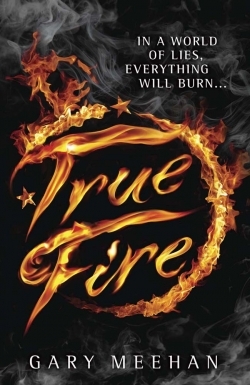 As she prepares to tell her family, the unthinkable happens. Her village is razed by soldiers: her grandfather murdered, her twin sister taken.

On a desperate mission to rescue her beloved Gwyneth, Megan discovers a terrifying truth - that the destruction of her old life is inextricably linked to her unborn child. The feared witch soldiers, vanquished a generation ago, have returned to see the fulfilment of a prophecy: one that will put Megan and her new friends - Eleanor, a fiery ex-aristocrat, and Damon, a wayward charmer - at the heart of the greatest war her world has ever known.

*Received in exchange for an honest review*
*Thank you, Quercus*

I really enjoyed this book. I'm not usually a big fan of witches - they're my least favourite in the paranormal genre - but this wasn't anything like I thought it would be. The fact that these weren't anything like your usual witches really appealed in fact. It made for a fun and fast paced read - I devoured it in just two days. Considering I'm in a bit of a reading slump this was so refreshing for me! In a world where history seems to be repeating itself, we journey with our protagonists, Megan, Damon and Eleanor on their quest to mission her twin sister, Gwyneth.

True Fire contained many twists and turns which I didn't see coming. There were many avenues that I didn't even consider occurring which left me feeling shocked, relieved and disorientated! Megan is such a likeable character. I worried at the beginning that she was going to be a doe eyed girl relying on others for help, but she can definitely look after herself! There is an element of naivety to her at the beginning but I loved seeing her character develop throughout the book. The journey that she goes in is such a tough and harrowing one, I personally don't know how she could have coped without the thought of rescuing her sister. The things that are unveiled as the plot goes on are shocking but promise a thrilling sequel to the book!

I loved the character relationships here. The three main characters have such strong personalities and they're all so likeable in their own way. Megan is rash and feisty, Eleanor's lack of patience and people skills is hysterical, and Damon's witty one liners made the book for me. There are so many laugh out loud moments to counteract the darker chapters and I really liked this. It stopped the possibility of a really dark book. True Fire is a book filled with corruption and death, but also shows friendship and love. It's such a great book and I definitely recommend giving it a read!


GIVEAWAY
Quercus are hosting a fantastic giveaway which gives you the chance to win £50 worth of ASOS vouchers - brilliant! Here's the tweet you need to use to enter:

He was coming towards her. He was coming towards her. She had to get out of there right now. Megan crawled a couple of feet into the forest. No, she had to go home, back to the mill, warn Gwyneth and her grandfather. She started back towards Thicketford, but it was apparent the almost-screams coming from there were actual screams. The screams of the terrified, the screams of the slaughterhouse. She retreated to the cover of the forest. Who was doing this? Why?

The only way home was the direct way. Megan would have to cross the wheat field and ford the river by the mill. Her legs refused to move. She’d be spotted for sure and then . . . and then . . . She screwed up her face as if trying to squeeze the tears back in. At least make it quick. It had been quick for Wade. She thought again of his execution and wanted to throw up.

She risked a glance out from behind the tree. The axe man was about a hundred yards away, wading through the wheat. Megan had to move now, while distance offered her some protection.

She crawled out of the forest and into the field, fast as she dared. Stalks brushed her face as she snaked along, making her want to scratch and sneeze. She tried to keep her progress as soft as possible, placing her hands and feet on the patches between the wheat, praying the grass would reward her care by springing back into position behind her and concealing her movements.

The axe man was close, close enough Megan could hear him tramping through the field. She halted, held her breath, shrank to the ground, hid herself among the long stalks. Something crawled up her thigh. She gritted her teeth and swallowed. Worse things were out here. Far worse things.

She heard a second figure crashing through the wheat. ‘What are you doing out here?’ he said. His accent was refined, like that of the northern merchants who had passed through Eastport when she had been at school there.

Megan assumed this was the axe man. His voice was harsh, raspy, as if someone had slashed his vocal cords.

‘The captain says we’re to group at the mill.’

Fear twisted Megan’s muscles. The mill – her home. She had to get there now, had to get her family to safety, but any movement would attract the axe man. He was still here, a faint whoosh occasionally coming from his direction. Swinging the axe through the air, seeking his next victim.
Posted by Unknown at 10:00