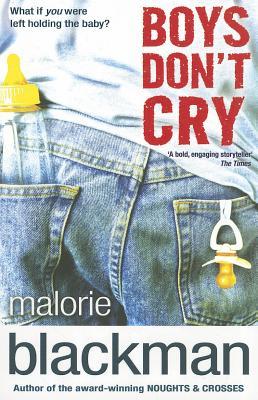 You're waiting for the postman - he's bringing your A level results. University, a career as a journalist - a glittering future lies ahead. But when the doorbell rings it's your old girlfriend; and she's carrying a baby. Your baby.

You're happy to look after it, just for an hour or two. But then she doesn't come back - and your future suddenly looks very different.

I read this book in three hours. I think that is my review done right there. Just three hours. I couldn't put it down. This is the first Malorie Blackman book that I've read in years and the only one outside of the Noughts and Crosses series. I don't know what the hell I've been waiting for because she writes such beautiful, real stories. Her work explores such real situations and is dealt with so sensitively; I can't praise her enough. This is the first book I've read about teenage pregnancy and I don't think it could have been handled better. It's full of confusion, fear, happiness, excitement, anxiety; everything I can imagine a new parent feels with their first child.

What I love most about Malorie Blackman's work is that feeling of hope that she leaves in her work. Things seem so unbelievably dire at times in this book but she always manages to end it, filling the reader with hope. I loved how realistic things were and I learnt some things too. Being 23 myself, 6 years older than Dante, the thought of having a child still fills me with fear. I found myself empathising with him so much and feeling bouts of anxiety as I watched him cope. Dante developed so much as a character throughout; from waiting for his A Levels to becoming his father. I loved that he was so human. He wasn't perfect. He messed up. He needed help. It definitely showed that having a child is even more work that I thought it was.

Not only does Boys Don't Cry explore the issue of teenage parenthood, it also explores LGBT issues and grief. Malorie Blackman is blunt in her depiction of the harsh truths of the treatment of the LGBT community with one particularly horrific scene. This book invokes so much feeling from the reader. I don't think anyone could read it without growing attached to Dante and his brother Adam. Between the social implications that Dante faced with being a teenage father and Adam being gay; there is plenty of tension and anxiety in this book. I thought it was all handled beautifully, and the fact that Malorie Blackman gave a hopeful spin to the situation made me feel fairly happy closing the book.

What was refreshing about this was reading about a teenage father. More often than not, topics explore the teenage mother's situation but rarely the fathers. The things that Dante encounters purely for being male is ridiculous and shocking. This was such an eye-opener and an insightful book. I'm looking forward to reading more of Malorie Blackman's work. I'm officially addicted!
Posted by Unknown at 15:11