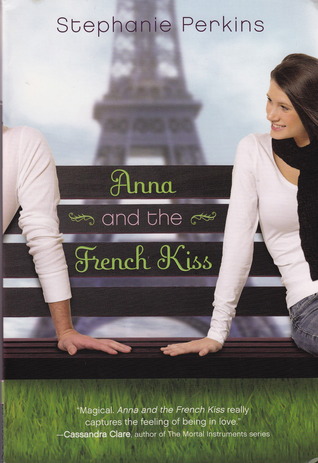 Anna is looking forward to her senior year in Atlanta, where she has a great job, a loyal best friend, and a crush on the verge of becoming more. She is less than thrilled about boarding school in Paris - until she meets Étienne St. Clair. Smart, charming, beautiful, he has it all - including a serious girlfriend. Will Anna get her French kiss?

I finally got around to reading this book. After what feels like years I decided to pick up Anna and the French Kiss to see what all the fuss is about. I've been in a pretty good contemporary reading mood at the moment so it seemed like the perfect opportunity to pick up one of the most popular books in the blogosphere. I enjoyed it... but I wasn't blown away. I don't know if it was the hype or whatever, but I didn't see what all of the fuss was about. *Prepares for exclamations and abuse*.

This doesn't mean I didn't like the book. It got 4*! I thought it was such a sweet little read. I loved watching Anna settle into French life and start to come out of her shell slowly. She is so clumsy and such a real person. I really felt like I could empathise with her. Anna had all of the awkwardness and the normalcy of a teenager girl without being annoying. She wasn't a huge stereotype but I think so many of us could see parts of ourselves in her.  The situations that Anna and Etienne found themselves in were so very familiar and it captures the feeling of first falling in love so, so well.

Even though this book didn't blow me away, I still really enjoyed it. I liked the conflicting relationships and a few of the high school clichés that are found in it. I knew how it was all going to play out, but I still found myself hoping and feeling very invested in the book - after all, it took me just over a day to read the entire thing! If you haven't read it, I would recommend it. It's such a light and fluffy read which conveys how it feels to fall in love; the emotions, the turmoil and the beautiful connections that are created. A cute little book and I'll definitely be picking up Lola and the Boy Next Door.
Posted by Unknown at 14:08