The lovely Erin Lawless, author of The Best Thing I Never Had stops by the blog today to talk about her time at university, what it meant for her and how influenced her fantastic debut! I cannot recommend this book enough. It's touching, so very real and so moving. This is one of the most lovely guest posts I've had on the blog and I'm so excited to share it with you guys:

I absolutely loved my time at university. I found out that I could do my own laundry and set up direct debits without my parents having to help. I found out that I had a talent for independent study and carried on after my undergraduate degree to study for a wonderful but totally unnecessary Masters. I found out who I was as a person - all the bad things, and all the good - and learned to accept that all people have such a range. I found the boy who would become the man I marry. And in all of these things I found the inspiration for what would become my first novel, The Best Thing I Never Had.

It’s therefore perhaps unsurprising that the question of just how much of my own university experience translates into Best Thing comes up from readers again and again. Because, to be honest, on the face of it, Harriet is exactly like me at 20; an English student who lives and breathes her close group of friends who have been by her side since school - until a boy walked into her life... Best Thing centres around the love triangle of Adam, Harriet and Harriet’s best friend, Leigha. The ‘true life’ inspiration for it, however, was nothing so neat as a triangle…

I met Oli at the start of the final year of my degree. I was a worldly twenty year old, and he was a mere boy of nineteen. We bonded over our shared course (and that because I was a year ahead of him he could just copy all my coursework and lecture notes) and over the fact that we both had partners we were quite desperately trying to disentangle ourselves from. We’d sit up long into the night bitching mercilessly about our hapless other halves and soon we were spending all our free time together, as comfortable as if we’d been friends for ten years.

My two best friends - actually literally of ten years’ standing - couldn’t have felt more differently about him. One couldn’t stand him - accusing him of being childish and arrogant and didn’t approve of me ‘wasting time’ with him. The other best friend decided quite dispassionately that she’d like to seduce him and leisurely set about her task, texting and Facebooking him constantly, rubbing up against him when we all went dancing. It only got worse when Oli finally managed to break up with his girlfriend; my friend upped the flirting to overdrive. “Can you control her?” Oli once asked me, crossly. “I’m not interested in her. I like someone else.”

I was still trying to shake my boyfriend; I am a notoriously awful dumper, and therefore so grateful I will never have to do it again! I’d break up with this poor guy but relent the minute he cried and begged, but hate him a little bit more each time. “Just do it,” Oli would urge me, strangely impatient. “Life’s too short.”

And then, one snowy week in February, I was put to bed with a stinking head cold. I didn’t make it further than the kitchen for almost a week, missing all lectures and social engagements. On the evening of the fifth day of my unexpected quarantine, Oli came to visit me, bringing the obligatory chicken soup. I hadn’t had a shower for days, was in a disgusting pair of baggy pyjamas with hair like a bird’s nest and a puffy face, but I didn’t care: it was only Oli, after all, and I was just happy to see him. He apparently felt the same. “I’ve missed you,” he said suddenly, after about an hour of talking about nothing in particular. And then he kissed me, snotty nose and all and there were only milliseconds of shock before I realised just how right it all was. It was always meant to be me and Oli.

But it could never just be me and Oli. I technically still had a boyfriend. My best friend was still desperately trying to get in Oli’s pants. No matter what I did, it was going to hurt. I stuck my head in the sand and went into deep, deep denial. I’ll tell everyone when the time is right, I told Oli, told myself. But there is never a right time for something like that and it all spiralled out of control.

My best friends were disgusted with what they saw as my betrayal. They called me a liar, a slut, the worst sort of person. They never spoke to me again. I had to continue living in our shared house with them for three months, being double-locked out, having my milk poured away down the sink, my post ‘accidentally’ thrown behind the fridge, being slowly brainwashed into believing all the things that were being said about me. I hated myself, so how could I love Oli? I pushed him away over and over and eventually, he went.

Fast forward. I got older, and wiser. I missed my ex best friends every day - honestly, I still do - but I made new and better ones. Knowing heartbreak (and heartbreak it was, even though it was from friends, not a lover) didn’t kill me, it made me stronger. But I couldn’t forget the way that Oli had made me feel, the rush of stolen kisses in the snow. But mainly, I just missed my friend.

“Let’s be friends,” I told him, after we’d traded awkward apologies for what had gone before. I wanted more than friendship, but Oli was once again with his ex. Almost immediately, we were back to where we had started. And I felt it again, even stronger than it was before: it was always meant to be me and Oli. “Just do it,” I told him, when he complained how hard it was to break up with his overly-emotional girlfriend for a second time. “You told me to once, and I should have listened to you. You told me that life was too short to be with the wrong person. But really, it’s that it’s too long to be with the wrong person.” And although I never looked for it, and certainly didn’t deserve it, I got my second chance. Oli could have so easily have been the one that got away; instead - eight years to the month we met - he will be the one giving me his last name.

Write what you know, they say. Well I have known two things very strongly: love and friendship, and the highs and lows of each. And so although Harriet is not me, her friends are not meant to be my ex-friends, and her story is not my story, I know intimately the rollercoaster that I set her on in The Best Thing I Never Had: the queerness that is loving the people that hate you, hating the people that love you and the fine, fine line between it all.

The Best Thing I Never Had 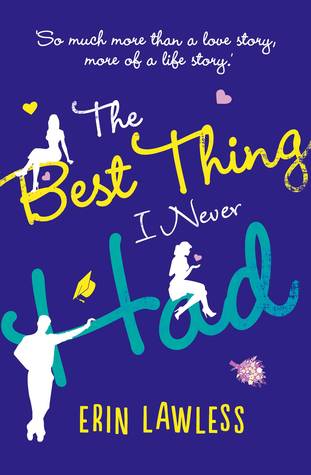 Five years ago they’d been seven friends at university that laughed hard and loved harder.

Nicky and Miles, the couple that were always meant to be… Leigha and Adam, maybe not.

So when Harriet and Adam grew close, during those endless days in the library and too many seminars they (well, Adam) hadn’t prepared for, they did the one thing that changed everything. They kept a secret. And when it came out, it all fell apart.

When the day comes for bridesmaids to be chosen and best men to fulfil drunken promises, Nicky and Miles’ wedding isn’t just a wedding, it’s a reunion – loaded with past hurts, past regrets, past loves…

The Best Thing I Never Had is in turns funny and sad, but always honest, about friendship in all its forms and the practicality of second chances.

She lives with a man who buys her books instead of flowers. On this website she blogs about her writing, history and anything else that catches her – admittedly rather distracted – interest.

Erin’s second novel, Indefinite Leave to Remain will be released by Harper Impulse in winter 2014.

Outside of the third person, she’s most often found on Goodreads and Twitter and would love to make your digital acquaintance.

Buy The Best Thing I Never Had here!
Posted by Unknown at 09:30