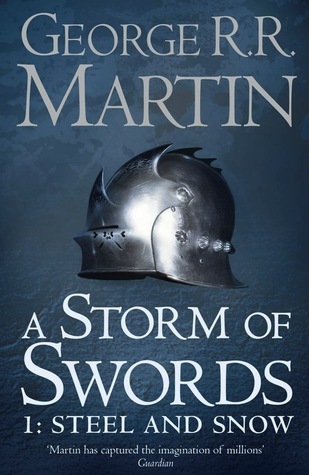 The Seven Kingdoms are divided by revolt and blood feud. In the northern wastes, a horde of hungry, savage people steeped in the dark magic of the wilderness is poised to invade the Kingdom of the North where Robb Stark wears his new-forged crown. And Robb's defences are ranged against the South, the land of the cunning and cruel Lannisters, who have his young sisters in their power.

Throughout Westeros, the war for the Iron Throne rages more fiercely than ever, but if the Wall is breached, no king will live to claim it.

Ohhhhhhhh shit's starting to go down in Westeros!

THIS! This book is the best one that I've read in the series so far. The plot is thickening, animosity is rising and I am absolutely loving it! A Storm of Swords: Steel and Snow has so many twists and turns and is, of course, filled to the brim with deaths. I was absolutely devastated by one of them even though the character wasn't all that major! There was something so tragic about it. I shouldn't have been surprised that all loyalties waver in this series and in the hardest of times but I did not like it. Not at all.

The thing I loved the most about this book was the development of the female characters. Sansa is starting to come more into her own and Daenerys is seriously badass! I couldn't wait to see these characters strengthen and I love them all the more for it. Sansa used to wind me up something rotten in the first two books, but she's finally starting to come out of her shell. I am absolutely praying that she forgets all of her airs and graces soon - just say what you think woman! Her distrust in everyone is completely understandable, though. She isn't in the best of situations! I liked the introduction of a few more narrative viewpoints which help vary the novels up a bit. It makes for brilliant reading seeing the war from so many different perspectives.

GRRM's work blows me away time after time. I have no idea how he keeps up with all of his characters. I definitely don't envy his editor either! The A Song of Ice and Fire series takes fantasy to a whole new level. It was already complex and ambitious in what it did, but GRRM's world is expansive, lavish and action packed. He must have notes ALL over his house. I admire his ambition with this series and his guts for committing to it. I'm so glad he did because it's absolutely mind blowing. I'm so glad that GRRM was my first epic fantasy read. It's definitely made me want to read more of adult fantasy, particularly the epics.

If you haven't started this series yet, I don't know what you're waiting for, I really don't. There are characters that you love to hate, characters that you hate to love and packed with so much action and drama - it's impossible to put the books down. With as many twists and turns and warped familial relationships, GRRM has a built a world that's captivated us all. I cannot wait to read more of this series.
Posted by Unknown at 19:56

Email ThisBlogThis!Share to TwitterShare to FacebookShare to Pinterest
Labels: a storm of swords, game of thrones, george r r martin, steel and snow