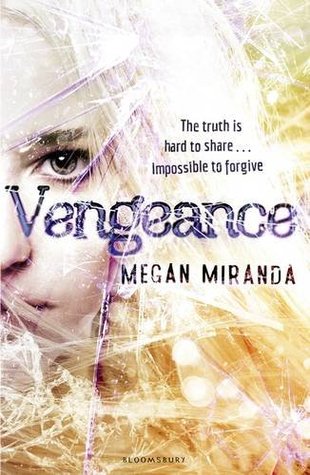 Falcon Lake wants vengeance. And so, it seems, does someone else... An intense, heart-rending psychological thriller to accompany the chilling and seductive Fracture

When Decker drags his best friend Delaney’s lifeless body out of the frozen lake, he makes a deal: Anyone but her. Everyone but her. The lake releases her. It takes another...

All their friends blame Delaney for Carson’s death. But Decker knows the truth: Delaney is drawn to those who are dying, and she would have tried to help Carson.

Or so Decker believes until a body lies in front of him in a pool of water on his kitchen floor. Until he sees in Delaney’s eyes that she knew this would happen too – and she said nothing. Until he realises it isn’t the lake that is looking for revenge – Delaney is part of someone else’s plan.

Vengeance is the brilliant sequel to Fracture in which Megan Miranda carries on the suspense of the previous book, but with so much more power and emotion. Vengeance is written from the point of view of Decker and I felt like the two books definitely benefited from it. It was really interesting and insightful to read from the outside and seeing how other characters cope with Delaney and the 'curse' of the lake that she nearly drowned in. I felt like reading from the point of view of Decker definitely gave a deeper insight into their relationship and it deepened my sympathy of Delaney so much. She is definitely a character that I wouldn't want to trade places with.

Megan Miranda once again sucked me straight back into this world. I was intrigued to find out how these events were unfolding, and with it being from the point of view of Decker, I had absolutely no idea who or what was behind anything and if Delaney was aware of any of the goings on in the book. The thrilling aspects were heightened further without the insight of Delaney and I flicked through the book eagerly - I desperately wanted answers to all of the questions that were left hanging open! There is so much that I want to type in this review but can't without giving away some pretty big spoilers.

Vengeance has so many emotional scenes and Decker has to come to terms with some incredibly difficult things. Many relationships are strained in this book and we begin to see the true effects of Delaney's 'gift' on herself and those that are aware of it. There are so many twists and turns and it constantly keeps you questioning the events which unfold. I really enjoyed this book. It was exciting, riveting and filled to the brim with suspense. I'm looking forward to reading more of Megan Miranda's work - I absolutely adored these two books!