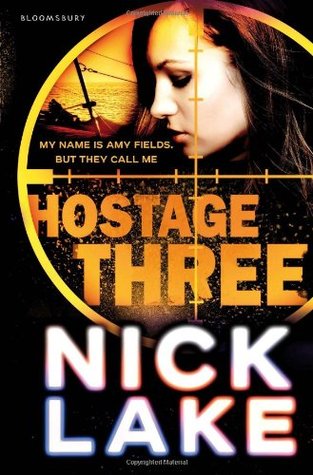 It's a once-in-a-lifetime thing: a girl on a yacht with her super-rich banker father; a chance for the family to heal after a turbulent time; the peaceful sea, the warm sun . . . But a nightmare is about to explode as a group of Somali pirates seizes the boat and its human cargo - and the family becomes a commodity in a highly sophisticated transaction. Hostage 1 is Dad - the most valuable. Amy is Hostage 3. As she builds a strange bond with one of her captors, it becomes brutally clear that the price of a life and its value are very different things . . .


This book turned up on my doorstep as a complete surprise and, after reading the synopsis, I really couldn't wait to sink my teeth into it. I've not read anything pirate related so I was interested to see how everything would all play out. I didn't expect such an emotional ride. I didn't expect to read a book which evoked sympathy and empathy for the pirates. Yes, there were a few of your stereotypes, but this book shared with us not only the lives of Amy and her family, but the lives of the pirates too. It deals with many big issues: suicide, violence, poverty making for a truly heart-wrenching read.

It took me awhile to get fully immersed in the book. The beginning was a little slow and there was far too much focus on the rebellious teen. I'm not saying that there shouldn't have been, but I found myself unable to conjure up sympathy for Amy, the protagonist. In fact, I found it hard to empathise at all with that family. The only character which seemed to be making an effort was Amy's stepmother - a character that is constantly bad mouthed, sticking to the stereotype of teen vs. 'replacement' mother. I found myself having a lot more sympathy for the pirates as well, rather than Amy. It was a strange experience feeling empathy for the criminals, but the more the author shared with us about their past, the less I found myself able to hate them.

The romance aspect of the book was difficult to get my head around. I first thought that it was the authors way of showing us how Stockholm Syndrome develops, but the more I read the less certain I became. It was a very conflicting romance and I didn't find myself connecting with it until the events at the end of the book. It's definitely a tear tester - but that was from the point of view of the pirates rather than Amy and her family. The one thing I liked about Amy however, was seeing her develop throughout the three weeks. She matures and begins growing into an adult rather than the teen that she was when she left land. It was written really well, and I definitely began to like her more as the novel progressed.

Hostage Three makes for an interesting, emotional and conflicting read. I didn't expect to empathise with pirates but this is the emotion that this novel brings to the forefront. A really good and different read, I will definitely be reading more of Nick Lake's work.