Today I'm so happy to hand the reigns over to none other than Kasie West, author of the brilliant Pivot Point. She is here on the blog to talk to us about the Abilities within the novel. Kasie shares with us her inspiration for the creation of these and how she came up with the different Abilities!

Each of the characters living in the paranormal compound of the Pivot Point world has an ability, a beyond-normal power if you will. This was one of the more challenging aspects of writing the book. The book was inspired by the movie Sliding Doors. While thinking about movies that needed to be made into teen books, I thought of Sliding Doors. I thought, what if instead of it being a contemporary-type plot showing alternate worlds, there was actually a girl who could see alternate futures. What if she lived with these alternate futures in her head and had to deal with that. Thus, the idea for the book was born.

So that was the easy part. But then I had to place her in a world where she was surrounded by lots of advanced minds. I didn’t want the characters to have super powers that seemed completely far-fetched, like flying or fire vision. I wanted powers that might occur if our minds had just a bit more advancement. As if the minds of this world were the next step in evolution. As if their brains were more efficient, more active. So I tried to think of abilities that might naturally result from minds advancing.

Memory Eraser. Laila, Addie’s best friend, is a memory eraser. When I think about memories and how they’re stored, I thought it would be cool if there was someone who could go in and wipe those clean, shut off paths in the brain that give us access to those memories. This ability was fun to work with because if you knew someone who could make you forget things, you would always wonder if she’d made you forget things. Also, it made me start to think about myself and if there were any memories I’d want to forget, any that I’d ask my best friend to Erase.

Telekinetic. This was an easy one to think up mostly because there are people who claim to have this now. So when thinking about advanced brains, it seemed logical that some people would be able to move things with their minds. And seeing how a backdrop of the novel is football, this power played in very nicely.

Lie Detector (Discerner). Addie’s father is a lie detector. I love this ability. This one came about because I thought to myself, when I was a teenager, what would be the absolute worst power that my parents could’ve had? Ha. I would’ve hated it if my father could’ve been able to tell every time I told a lie. Come to think of it, he probably could tell, he was just a really good dad and let me get away with it so that my guilt of lying to him ate at me.

Mass Manipulator. Who doesn’t want to walk through walls and bend solid objects? Okay, so maybe it’s not something you’ve ever thought you wanted to do, but it was another ability I thought could possibly come with an advanced mind. This idea that matter could be altered and changed with our brains.

There are many other abilities in Pivot Point/Split Second, but I think I’ll stop there. You’ll have to discover the rest as you read. As for which ability I’d love to have when my mind advances…this answer changes on a day to day basis depending on my needs at the moment. Right now I’d love to slow down time a bit because things seem to be moving so fast.

Addison Coleman’s life is one big “What if?” As a Searcher, whenever Addie is faced with a choice, she can look into the future and see both outcomes. It’s the ultimate insurance plan against disaster. Or so she thought. When Addie’s parents ambush her with the news of their divorce, she has to pick who she wants to live with—her father, who is leaving the paranormal compound to live among the “Norms,” or her mother, who is staying in the life Addie has always known. Addie loves her life just as it is, so her answer should be easy. One Search six weeks into the future proves it’s not.

In one potential future, Addie is adjusting to life outside the Compound as the new girl in a Norm high school where she meets Trevor, a cute, sensitive artist who understands her. In the other path, Addie is being pursued by the hottest guy in school—but she never wanted to be a quarterback’s girlfriend. When Addie’s father is asked to consult on a murder in the Compound, she’s unwittingly drawn into a dangerous game that threatens everything she holds dear. With love and loss in both lives, it all comes down to which reality she’s willing to live through . . . and who she can’t live without. 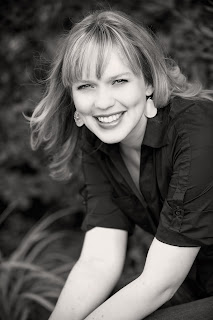 About the authorI love to write--too much. It's a sickness really. My debut novel, PIVOT POINT, is out now with HarperTeen. (And will be followed by its sequel, Split Second on February 11, 2014.)

THE DISTANCE BETWEEN US, my contemporary YA novel, will be published July 2, 2013 (HarperTeen).