SHADOWPLAY Blog Tour: Laura Lam on The Grey of Gender

I'm over the moon to have Laura Lam on my blog today. I adore both of her books; Pantomime and Shadowplay so I'm really excited to have Laura talk about a topic that I am absolutely fascinated by and enjoy discussing. Here is Laura talking about:

The Grey of Gender

Before writing Pantomime & Shadowplay, I was interested in gender, but now I’m passionate about it. I grew up in the San Francisco Bay Area, so I was always surrounded by different sexualities, races, abilities, and gender presentation. But for all of that, when I decided to write about a character who fell between genders, I knew I needed to learn more. I am always consciously aware that, as a cis-gendered woman, I am very much an outsider looking in, and my goal is to tread carefully and with respect. I’m not sure I always succeed, but I do always try.

I read a few books on gender theory, and then started researching intersex especially. What I found made me cry. I had no idea that babies a few days old were operated upon to make their genitals look “more normal,” even though that can take away a lot of sensation and, of course, the doctors half a 50/50 chance of choosing the sex that the child’s gender identity won’t identify with. I didn’t realise that a lot of the time, those surgeries can later have complications, resulting in many other surgeries. 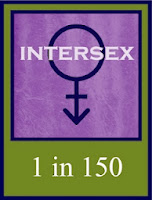 Mainly, I didn’t realise how few people knew about it, even though it can be around 1 in 2,000 births, which is more common than cystic fibrosis (source: ISNA: http://www.isna.org/faq/ten_myths/rare). A lot more people know what cystic fibrosis is than intersex. ISNA also mentions intersex people could be more common than Jewish people. So it’s not uncommon, but it’s still unheard of. When I first researched it, I still called intersex “hermaphroditism” at first, not even realising that some find the term offensive and misleading. Now I gently correct people when they call Micah a hermaphrodite. In some ways, it’s almost the last taboo that no one wants to talk about, and I don’t understand why.

I didn’t write my books to preach or send an overt message or tackle an issue. Micah is, first and foremost, a character that I love and gave his/her own dreams, fears, and desires. But by writing about a character who doesn’t conform to the male/female false dichotomy, I hope teens and adults alike think, at least a little, about how very fluid gender can be. And that it’s fine to not lie on one end of the spectrum or the other, whether it’s through gender presentation, or internal gender identity, or physical sex. It shouldn’t be secret, or shameful. Micah does keep his intersex aspects secret at first, but the whole trilogy is geared towards him accepting himself, as well as other characters finding themselves, while also having adventures, performing in the circus or on the magician’s stage, falling in love, and unravelling the secrets of Ellada.

If you want to learn more about intersex and gender studies, please take a look at my Works Consulted page on my website: http://staticsplit.wordpress.com/works-consulted/


Laura Lam was raised near San Francisco, California by two former Haight-Ashbury hippies.
She relocated to Scotland in 2009 to be with her husband, whom she met on the internet when he instant messaged her and insulted her taste in books. She almost blocked him but is glad she didn’t.
At times she misses the sunshine.

Thanks for stopping by Laura. This post is really insightful and has given me more information on the intersex community :).
Posted by Unknown at 11:00