REVIEW: The Palace of Curiosities by Rosie Garland

The Palace of Curiosities by Rosie Garland 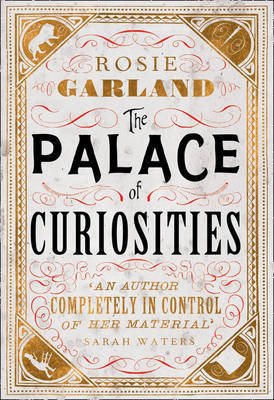 A luminous and bewitching debut novel that is perfect for fans of Angela Carter.

Set in Victorian London, it follows the fortunes of Eve, the Lion-Faced Girl and Abel, the Flayed Man. A magical realism delight. Before Eve is born, her mother goes to the circus. She buys a penny twist of coloured sugar and settles down to watch the heart-stopping main attraction: a lion, billed as a monster from the savage heart of Africa, forged in the heat of a merciless sun. Mama swears she hears the lion sigh, just before it leaps...and when Eve is born, the story goes, she didn't cry - she meowed and licked her paws. When Abel is pulled from the stinking Thames, the mudlarks are sure he is long dead. As they search his pockets to divvy up the treasure, his eyes crack open and he coughs up a stream of black water. But how has he survived a week in that thick stew of human waste?

Cast out by Victorian society, Eve and Abel find succour from an unlikely source. They will become The Lion Faced Girl and The Flayed Man, star performers in Professor Josiah Arroner's Palace of Curiosities. And there begins a journey that will entwine their fates forever.

*Received in exchange for an honest review*
*Thank you, Harper Collins*

If you blend in Angela Carter's The Magic Toyshop, Sarah Waters' Fingersmith and Barbara Chase-Riboud's Hottentot Venus the result would be The Palace of Curiosities. A mystical and entrancing novel which explores the Other within society, it is definitely well worth a read. It's once again another of those novels that would be fascinating to study. The exploration of what it means to be human is done so thoroughly and poetically, it really was one of those one of a kind reads. I loved that it held elements of books that I love to read or to study, it gave the novel more depth as I once again followed the path which displays the horrendous mistreatment of those that are not considered to be the 'norm'.

I love books that are set in the Victorian era. It just sucks me in and I feel like I can almost smell the smoke and gaslight that surrounds it. This book was no different with the twisting alleys, dark atmosphere and descriptions of poverty. It's a setting I instantly lost myself in. The backdrop seemed fitting to portray the group of unique characters that are exploited by Mr Arroner. The story follows the story of Abel and Eve, both with their own quests ahead of them. Eve, a character that was duped into becoming the wife of Mr Arroner is known as the 'Lion-Faced Girl'. Covered in hair and with paws, she is used and exploited in order for her husband to earn money. Abel, known as the 'Flayed Man' appears to be immortal and without the ability to bleed no matter how much he cuts himself or attempts suicide. The paths of these two characters collide and make for such a dark story.

The unfolding of this abuse is so in depth and disturbing. I felt myself longing for Abel and Eve to find a way out of their situations. It's sad to realise that the same attitude to those that are different from the 'norm' are treated horribly still. This book is an exploration of the dangerous societal attitudes and is deeply moving. A very different book and if Carter, Waters or neo-Victorian literature is your thing, this will definitely be for you.