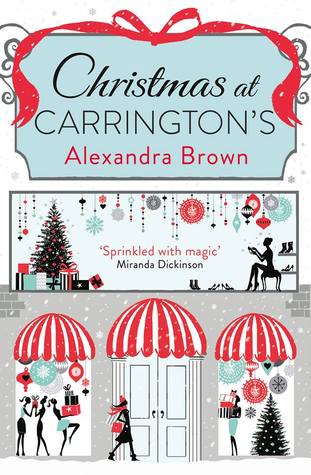 Carrington’s Department store is thrown into a spin when the staff learn that a hot new reality TV show is to be filmed in-store, featuring the formidable retail guru, Kelly Cooper. Georgie Hart, in charge of Luxury Handbags, is reluctant, but quickly realises that the show could give Carrington’s a new lease of life. With Christmas around the corner, she’s also hoping that the season will deliver her the perfect Christmas present, in the form of Tom, the store’s dishy boss.

When the film crew arrive, things start to go wrong. One of Tom’s old flames, Zara, is working on the show and then, to top things off, Tom and Zara are sent off to Paris and New York for a spot of extra filming. When Georgie settles down in front of the box to watch the first show, worse it to come – Georgie is shown in a far from flattering light and she is horrified to learn what Tom has been up to.

Georgie fears this is turning out to be the worst Christmas ever, but Santa might have a got a little surprise in store for her stocking this year – but she’ll just have to wait until Christmas to find out!

*Received in exchange for an honest review*
*Thank you, Harper Collins*

I was really looking forward to reading this book. I thought it would be a perfect book to read in the few days before Christmas. However, I wasn't as taken in by it as I'd hoped to have been. It didn't leave me feeling in a particularly festive mood. The only thing that hinted towards Christmas was the fact that Georgie kept referring to all of the Christmas food and offers that she'd bought. I found it to be a quite a bland story which could have gone so much further than it did. The synopsis had me hoping for something a little more dramatic than what actually happened in the book.

Christmas at Carrington's was an entertaining story with a few humorous moments thrown in. I couldn't get myself to care too much about the characters. The events which unfolded were something that you'd expect to see in a chick-flick. Having read one of Lindsey Kelk's books, I was really looking forward to reading more within the genre, but this one left me feeling a little disappointed. There wasn't as much charisma and charm to this book, it all felt a little bland. It wasn't my cup of tea unfortunately. There wasn't anything wrong with the book, it just wasn't for me.

The book features moments of heartache, Bridget Jones-esque behaviour from Georgie and a few laugh-out-loud moments. It's quite a light-hearted and quick read which will leave you feeling warm and fuzzy. I did enjoy it, despite it not being my cup of tea.
Posted by Unknown at 15:13