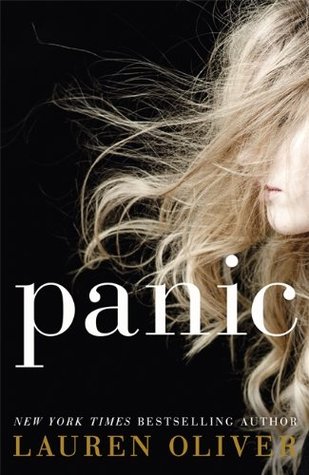 Panic began as so many things do in Carp, a dead-end town of 12,000 people in the middle of nowhere: because it was summer, and there was nothing else to do.Heather never thought she would compete in Panic, a legendary game played by graduating seniors, where the stakes are high and the payoff is even higher. She’d never thought of herself as fearless, the kind of person who would fight to stand out. But when she finds something, and someone, to fight for, she will discover that she is braver than she ever thought.Dodge has never been afraid of Panic. His secret will fuel him, and get him all the way through the game, he’s sure of it. But what he doesn't know is that he’s not the only one with a secret. Everyone has something to play for.For Heather and Dodge, the game will bring new alliances, unexpected revelations, and the possibility of first love for each of them—and the knowledge that sometimes the very things we fear are those we need the most.

*Received in exchange for an honest review*
*Thank you Hodder & Stoughton*

Lauren Oliver has once again captured me in another of her wonderful worlds that she has created. I was absolutely ecstatic to receive it in the post - to the extent that I had my partner drive it up to Nottingham from Wales to me (granted he was coming up anyway) - and I really couldn't wait to sink my teeth into it. I tried so hard to hold off a little as it isn't released until March 2014, but Oliver's work is too much to resist and WOW am I glad that I delved into the world that she has created.

Panic is definitely a book which I recommend reading at home. It is impossible to keep an impassive face - I found myself on several occasions with my mouth hanging open in shock or anticipation. I'm not usually an expressive reader but more often that not my face was giving away my emotions and I sped through this 400 page book. This thrilling, addictive book held me completely captivated - it's the first book in such a long time that I just haven't been able to get out of my head. When I finished I found myself just sat on my bed completely stunned. It's amazing to have this feeling once again about books - thank you, Ms. Oliver!

Panic is a game which takes place in the summer holidays every year. It is a dangerous and thrilling game which ends with the winner winning a ridiculous amount of money - the previous winner having won $50,000. All of the school kids in their final year of high school nominate themselves through taking part in the first task. These tasks worsen as the games go on with the identity of the two judges entirely secret. I found the creation of this game so clever and nerve-racking. It's taken so seriously by the teenagers participating with the importance of secrecy so extreme that people get physically hurt for not remaining silent. This was an insane read with Panic holding a kind of cult-like aura around it. It made for such an exciting read - I couldn't get enough!

Oliver writes with so much emotion that it is incredibly difficult to dislike her characters. Heather is such a very real person - sensitive, introverted, protective and just as flawed as any eighteen year old. I loved learning about her difficult family life and her reasoning behind taking part in Panic. Nat, Heather's best friend appears to be incredibly confident and superficial at a glance, but as the novel progresses we see so much more to her. She is so caring and tough on herself. It makes for a tough read in parts. I loved Bishop and Dodge too. Bishop, Heather's childhood friend, is quiet for so much of the book but so protective over his friends. I loved reading about the friendships. Dodge was such a complex and fascinating character, almost an anti-hero in a sense. I just loved reading about all of these characters.

I really cannot wait to start reading others reviews about this book. I'm so excited to see what everyone else thinks of this book! I found it mind--bogglingly good; it completely blew me away and held me captivated for the entire book. Lauren Oliver is one of the best YA authors that I've read, she almost reaches J. K. Rowling status with me - and we all know how much of a Potterhead I am. I can't give her a bigger compliment than that. An absolutely stunning, emotional and thrilling book, I look forward to reading even more of Oliver's work!