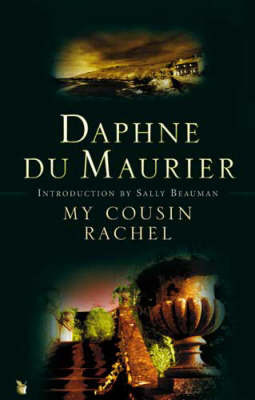 My Cousin Rachel is the gripping story of a Victorian young man whose placid life in the English countryside is turned inside-out by an older woman. The young man is Philip Ashley, the novel's narrator. Orphaned at an early age, he's been raised by his bachelor uncle Ambrose, who falls in love and marries while travelling in Florence, then dies there in suspicious circumstances. Shortly after her husband's death, Ambrose's widow turns up in England, setting the stage for the unfolding of a relationship between the callow Philip and the beautiful, sophisticated, mysterious widow. And while Philip impetuously embraces the role of the moth flapping full-tilt toward the flame, the widow never puts a foot wrong. Is she designedly luring Philip to his doom? Might she even have had a hand in Ambrose's death?

This is the second book of Daphne du Maurier's that I've read and I really cannot help but get sucked into these dark worlds. I get so invested in the characters and what they're plotting; it's always a harsh snap back to reality when I close the book. I was praying that it wouldn't have been a case of 'oh, Rebecca was good for a course book' and that I would hate the rest of her work. I didn't need to worry though, I was completely drawn in; this book would not let me go. The characters followed me wherever I went, I really couldn't get them out of my head. I daydreamed about them on the bus, pondering whether I was born in the wrong era and how cool it would be to live in the sorts of houses that they live in (minus the disasters du Maurier inflicts upon her characters). I can't be the only one that ever ponders this when reading a book set in a different era?


“He was like someone sleeping who woke suddenly and found the world...all the beauty of it, and the sadness too. The hunger and the thirst. Everything he had never thought about or known was there before him, and magnified into one person who by chance, or fate--call it what you will--happened to be me.”

This one contains the same amount of suspense and mystery as Rebecca. I was itching to know what was going to happen and I really wanted to know the truth about Cousin Rachel. There are so many twists and turns and on many occasions I just wanted to shake Philip so hard. It was an incredibly frustrating read at times but so, so addictive. Everything the characters did drew me further under their spell - there was no way that I was escaping. The building of the characters is superb; I found myself questioning so many of the characters motives and I could never get on top of them. They continued to surprise me. It was brilliant. Rachel is such a conflicting character, I still couldn't tell you whether I like her or not. The rivalry that Philip feels towards characters such as Rinaldi is so deeply ingrained that I couldn't help but hate Rinaldi too. Such a horrible character but without pinpointing why he is such a horrible character. Du Maurier succeeded in creating the exact feelings she wanted in me - if we were to hate a character, she made damn sure we hated that character.


“There is no going back in life, no return, no second chance. I cannot call back the spoken word or the accomplished deed.”

The only complaint I have about the book is that the ending left me wanting more, but not in a positive way. I felt like the ending could have been so much better, but it definitely finishes the book nicely! Reading more of du Maurier has got me addicted once again. I'll be keeping my eye out for more her work. I need to build up my little collection. I really adore this book and cannot recommend the author enough to people - I've even bought Ula a copy of Rebecca to get her reading du Maurier! She is such a beautiful writer and builds up the plot so incredibly well that I cannot help but get drawn in. This book has completely blown me away and now I'm nursing an awful book hangover. Well played, du Maurier, well played.