Today I'm excited to host a wonderful author, Rosie Best, as she shares with us her influences on her amazing book, Skulk. Rosie is published by Strange Chemistry and Skulk is her first novel. 5. Rivers of London by Ben Aaronovitch

Another brilliant urban fantasy, although much more recent, Rivers of London influenced Skulk in that it showed a London I absolutely recognised, from the diversity of the characters to the scrupulously researched architecture and history details. It’s a police procedural urban fantasy, The Bill meets Harry Potter, and it’s brilliant.

Hellblazer is a graphic novel urban fantasy series about John Constantine, a magician in a grubby trench-coat who is perpetually harassed by demons, ghosts and all sorts of oogly things. He generally manages to save the day, at least sort of, but with a death count that’s so absurdly high it’s already a running non-joke within the first few books. It’s fantastic, and occasionally really, really nasty - definitely rated M for Mother of God, What Did I Just Read - but it’s also a big influence on the grimier, nastier corners of London in Skulk. Let’s just say the artists on Hellblazer are masters of the art of drawing bodily fluids.

This is sort of cheating, but it’s absolutely true... a good chunk of Skulk’s locations were put in because I’d been there or heard about them and thought they were interesting places where cool stuff could happen! Places are very inspiring to me, and the great thing about London is that it’s so diverse and there’s something strange and interesting to see almost everywhere if you look properly. How could I resist using the Shard, or the abandoned tube stations, or the beautiful Embankment, or the Finchley Road all-night McDonalds? 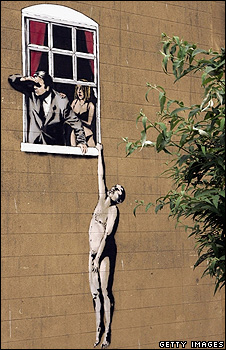 I should really say, Banksy and all the other graffiti artists and all the brilliant people who take photos of their work and spread them around the web. I really enjoy street art of all sorts and I’ve definitely been influenced by all sorts of artists in the way Meg and her graffiti hero E3 work. Banksy is top of the list - you can buy Banksy postcards at any tourist tat shop on Oxford Street so it’s quite hard not to be influenced by him even if you’re not writing about graffiti artists. His razor-sharp political insights really appeal to Meg, though, and it’s great that there’s a graffiti artist famous enough that you can reference him in a book and everyone will know pretty much what you’re talking about.

I feel almost silly bringing him up yet again, because I keep namechecking him in interviews and I know very few people who don’t love at least one of his books - but it’s true, Gneil is a huge influence on my writing in general and Skulk in particular. Neverwhere was one of the first urban fantasy stories I ever encountered, and I doubt Aldwych would feature in Skulk if it hadn’t been for Down Street. When Meg witnesses the dying moments of a shapeshifting fox and is given a beautiful and powerful stone, her life changes forever. She is plunged into the dark world of the Skulk, a group of shapeshifting foxes.

As she learns about the other groups of shapeshifters that lurk around London – the Rabble, the Horde, the Cluster and the Conspiracy – she becomes aware of a deadly threat against all the shapeshifters. They must put aside all their enmity and hostility and fight together to defeat it.

A really enjoyable book! Here is my review.