Q is for Quick-Quotes Quill 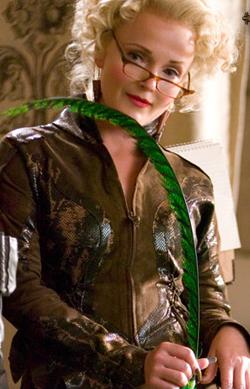 Probably one of the most despised items in the entirety of the Harry Potter series. The Quick-Quotes Quill is the quill used by Rita Skeeter in order to publish incredibly sensationalist and well, absolutele bullshit newspaper article about a variety of characters. In many scenes of Harry Potter and the Goblet of Fire, readers see the embellished articles written by this woman, from bashing Hermione, to making Harry out to be mentally unstable, and even abusing and outing Hagrid's ancestry. Yep, this Quill does not have a good name.

‘From the moment the article appeared, Harry had to endure people... quoting it at him as he passed them, and making sneering comment.

“Want a hanky, Potter, in case you start crying in Transfiguration?”

“Since when have you been one of the top students in the school, Potter. Or is this a school you and Longbottom have set up together?”’

Previous A-Z posts:
A is for Animagus
B is for Boggart
C is for Crumple-Horned Snorkack
D is for Diagon Alley
E is for Epilogue
F is for Forbidden Forest
G is for Galleons
H is for Hogsmeade
I is for Inferius

J is for Lee Jordan
K is for Knight Bus
L is for Remus Lupin
M is for Mirror of Erised
N is for Nicolas Flamel
O is for Occlumency
P is for The Potters
Posted by Unknown at 12:43