N is for Nicolas Flamel 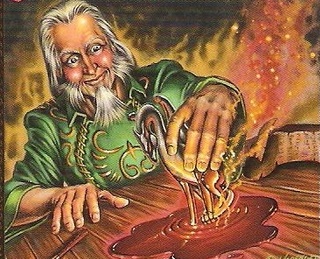 'Nicolas Flamel (c. 1327 - c. 1992) was a well-known alchemist and only known maker of the Philosopher's Stone, a legendary substance with incredible powers. He was a close friend and partner with formerHogwarts School Headmaster Albus Dumbledore. He owed his considerable age to the Elixir of Life which he and his wife, Perenelle, created using the Stone. They were aged six hundred sixty-five and six hundred fifty-eight, respectively, at their time of deaths.

Flamel is noted as an alchemist of considerable talent and as an opera-lover. It is said he enjoyed his later years living a quiet life in Devon. Although it is clear that he used the Elixir to greatly extend his life, it is not specified whether he used the Stone's powers to make himself greatly wealthy, as the Stone is also capable of turning any metal into gold.

The danger of the Stone's existence was brought to light when Voldemort, with the help of Hogwarts Professor Quirinus Quirrell, was nearly successful in stealing it for the purpose of restoring Voldemort to physical form. However, his plan was thwarted by the efforts of Harry Potter, Hermione Granger, and Ron Weasley. Flamel agreed, along with Dumbledore, that the stone should be destroyed. With enough Elixir to set his affairs in order, it was expected that Flamel and his wife would die shortly thereafter.'


Previous A-Z posts:
A is for Animagus
B is for Boggart
C is for Crumple-Horned Snorkack
D is for Diagon Alley
E is for Epilogue
F is for Forbidden Forest
G is for Galleons
H is for Hogsmeade
I is for Inferius

J is for Lee Jordan
K is for Knight Bus
L is for Remus Lupin
M is for Mirror of Erised
Posted by Unknown at 10:00