A Saturday post I have been doing to spread the Harry Potter love and to take us all on a trip down memory lane :). I wasn't online much yesterday so this weeks post is going to be on a Sunday instead.

F is for the Forbidden Forest

One of the most magical and mystical places in the wizarding world, the Forbidden Forest is prominent in many of the books and features some of the biggest battles in the series. From Ron's terrifying experience with Aragog's children to Harry going to meet his death, not to mention his first meeting with Lord Voldemort in The Philosopher's Stone. Alongside the negative features, there have also been some incredible moments within the forest. The Ford Anglia coming to the rescue to save Ron and Harry from the spiders, and, in probably one of the greatest scenes ever written, Professor Umbridge being carted off by the centaurs in the Forest.No one deserved this more! It's also this Forest in which Narcissa Malfoy assists Harry in defeating Voldemort. She covers for the fact that Harry is not dead, showing that she is not in fact, as evil as her weak husband, Lucius.

'The boy who lived, come to die' 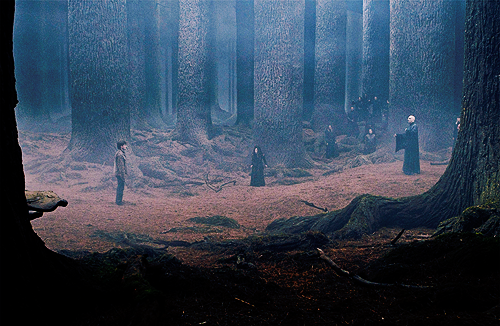 The Forbidden Forest is one of the few places tat the Hogwarts students are forbidden from visiting. With it being overtaken by various magical creatures; from unicorns to centaurs, spiders to thestrals, it's always worrisome to what you're going to encounter upon entering the Forest. There are rare circumstances in which students are allowed into the Forest, and this is always with the supervision of a professor. The first time we are taken in is through Harry, Ron, Hermione and Malfoy's punishment. They are taken into the Forest by Hagrid as punishment for breaking the rules. However, the students are also allowed in on a more positive note. They have a few Care of Magical Creatures lessons in there in which the trio first meet the wonderful hippogriff, Buckbeak.

A is for Animagus
B is for Boggart
C is for Crumple-Horned Snorkack
D is for Diagon Alley
E is for Epilogue
Posted by Unknown at 19:02