Harry Potter A-Z : E is for The Epilogue

A Saturday post I have been doing to spread the Harry Potter love and to take us all on a trip down memory lane :). I wasn't online much yesterday so this weeks post is going to be on a Sunday instead.

E is for The Epilogue

19 years later...
So this epilogue to conclude the series brought about much tension when it was first read. Some readers absolutely loved it. Others (myself included) really did not like it. It was far too brief and it felt like it wasn't necessary and that it was only tacked on to prevent others creating/ writing their own endings to the series. Now that I'm older, I can totally understand why she has done it. For something which has taken J. K. Rowling so long to write and something which has been so close to her, it is totally understandable to want to ensure that they get the ending that she had set out for them.

“Why are they all staring?" demanded Albus as he and Rose craned around to look at the other students.
"Don’t let it worry you," said Ron. "It’s me. I’m extremely famous.”

The humour is still kept in the Epilogue and the characters don't seem to have changed very much. Yes they're older and wiser with children but they're friendship seems to be as strong as ever. Neville is now a professor, Luna is married, Draco seems to have also settled down although I fail to believe that everything will ever be fine between our three heroes and himself. I do like the Epilogue now, but there are so many unanswered questions. (Some of which I will be confronting within my dissertation). What happened to all of the Death Eaters, for instance?


“Albus Severus," Harry said quietly, so that nobody but Ginny could hear, and she was tactful enough to pretend to be waving to Rose, who was now on the train, "you were named for two headmasters of Hogwarts. One of them was a Slytherin and he was probably the bravest man I ever knew.”

Although it leaves so many unanswered questions, it also gives us a chance to grieve for Snape and everything he has done throughout the series. His death was one of the most upsetting ones to read. We spend so long hating him and then to find out that he has been on the goodies side and protecting Harry all along? Ahh, it was unbelievably heart breaking. I find it amazing that although it isn't included in the story, J. K. Rowling knows exactly what has happened to each character following Hogwarts. Wouldn't it be amazing if she shared her snippets of information in a book? Similar to Quidditch through the Ages etc! 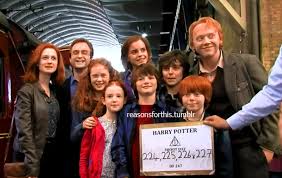 What is your opinion on the Epilogue? :)
Posted by Unknown at 09:28