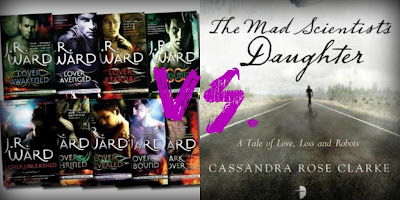 I've been doing a bit of thinking about the books I read, and I've noticed that I definitely read a lot more books that are part of are are going to become a series over stand alone novels. It's made me think about it quite a lot, I mean, why do I read these? Another thing I'm terrible for is picking up another the follow up book in the series even though the first wasn't actually all that great! It's like I can't let go or something - which is probably where the reading habit stems from.

Ever since I was a child I have always read series'. Whether it was The Babysitters Club, The Princess Diaries or Harry Potter. I always loved reading about the same characters and reading about the adventures they'd go on in each new novel. I never got bored of them and not much has changed now. Take for example The Blackdagger Brotherhood series by J. R. Ward. In roughly two years I have devoured all 11 of  her books (which includes waiting for #10 and #11) and am still not bored of the books despite them taking on similar aspects of the previous books. I crave them, and the same goes for the majority of other series.
I think it lies fully in the connection to a character. It feels like they become your friend. I just want to know what is going to happen to them. I care and couldn't even fathom stopping mid series. When Kelley Armstrong announced Thirteen as the last in the Women of the Otherworld series I was absolutely devastated. Apart from Harry Potter, they were my first introduction into the supernatural and I remember being completely lost as to where to go next. What author is similar? Is there one similar? Who is going to replace her? I used to have this absolute fear that I'd never find another book that would captivate me in such a way.

Before becoming a blogger, I was lost when it came to picking up books. Where do I even start? That was a question I often asked myself in Waterstones. There were so many books and all I had was the fantasy, paranormal and science fiction section to help. This didn't exactly narrow it down. I remember picking up so many books, putting them down, buying a book, hating it. Then I discovered this massive community of book bloggers, where reviews point you in the right direction and Goodreads saves your life. Again, I searched for book series' to read. Never a stand alone. I could probably count on one hand the amount of stand alone books that I have read/own (not counting course books - I didn't want to read those!). I think a few were Memoirs of a Geisha, Jane Eyre, Wuthering Heights and The Mad Scientist's Daughter. Luckily I loved each of these books but they always make me sad that there is no more to the story. I am still praying that Cassandra Rose Clarke will write more to The Mad Scientist's Daughter but to be honest, she has tied the story up nicely. I don't see how there is any need for expansion. I'm not slamming stand alone books at all, I just wonder why it is that I don't read them! I think I get too attached to the fictional world built by the authors. It's always a nice comfort blanket to know that there is another book coming; that this isn't the end. That we get more of these wonderful characters. Harry Potter was heartbreaking for me - thankfully I can't imagine another series which will leave me feeling so saddened by its ending as that series.

There are benefits to a stand alone. It's cheaper for one, haha. The ones I have read are wonderful and in my opinion, to be able to build a creative and believable world and characters that we can sympathise all within one book is amazing. Where a series allows the author to expand and develop, the stand alone allows the reader to constrict their story to one and to pour the entirety of their emotion into it. I'm just not the kind of reader that can let go, I need more from the characters. I like collecting the books for my shelves. There is the fear of a series getting boring or dragging, the danger of repetition, but thankfully I have yet to discover a series which has made me just mehhhh everywhere.

What do you guys think? Are you a fan of reading a series of books, or stand alones?