I am hopefully about to embark on an awesome task; an MA dissertation on Harry Potter. I thought I'd take this chance to show you guys my Top 20 Harry Potter moments (inc. books and films) as a starting off point. Please feel free to share yours in the comments or make your own post if you fancy! :). It would be really interesting to see if there are any similarities between them. 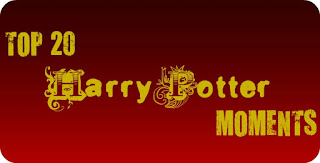 20. Harry and Hermione's awkward dance scene in HP & Deathly Hallows Pt.1 - Paaaah if the most awkward film moment ever award existed this would definitely be it! I loved it though, n'aww.

19. Ron vs. spiders - 'Why couldn't it just be follow the butterflies?'. This scene occurs in HP & The Chamber of Secrets when poor Harry and Ron have to pay Hagrid's good ole eight legged friend Aragog a visit. As a spider hater, I can totally sympathise with him here and it's just too funny. His squeaking over spiders is so unconventional for a male character - bless him!

18. Bellatrix's first appearance - Helena Bonham Carter actually plays the most perfect Bellatrix ever. Props to the casting team for the films, they did an amazing job. She's a character I love to hate - she killed Sirius AND Dobby. Way to test my boundaries, woman!

17. Hermione punching Malfoy - Need I say more? We all loved it!

16. Voldemort's rebirth - HP and the Goblet of Fire: I don't think this is a part we were meant to like, but without this we couldn't have had the grand finale in Book 7! It was dramatic and full of the loss and evil that it should embody. The rebirth of this dark wizard was gripping and the use of sacrifice and ritual was fascinating to see. Something quite dark and sinister for what was initially a children's series!

15. Harry vs Voldemort - HP & Goblet of Fire: the graveyard scene with the collision of Voldemort and Harry's wand. I loved this because of all of the recently deceased by the hands of Voldemort surround Harry and allow him to escape. It was beautifully written, I don't really have a specific reason for why I love this scene, it's just one of my favorites.

14. Neville beheading Nagini - Oh yeah, you get that Horcrux! Haha. It was so nice to see Neville FINALLY have a moment of glory!

13. Lockhart's blunder - HP & the Chamber of Secrets: Lockhart accidentally ridding Harry's arm entirely of bones following a quidditch match. I found it hysterical and so disgusting!

12. Visiting the Burrow - Probably my favorite house in the entire series. Its higgildy-piggildy construction and wonderful wizarding items it contains makes it almost a more magical place to me than Hogwarts itself. I can imagine living with the twins (if Fred had survived *cry cry*) would be amazing.

11. Lockhart losing his memory - Was there ever a more irritating character? At least one good thing came out of Ron's broken wand! (Whomping Willow 1 - 0 Ron).

10. Dobby & the chandelier - 'Dobby didn't mean to kill, Dobby only meant to maim or seriously injure!'. Probably one of the most famous lines of the film franchise. It definitely has to be up there with 'the boy who lived'. This scene is easily a favourite. Almost smushing Bellatrix along with the best line ever, how can anyone dislike it?

9. Harry & the sorting hat - How on earth J.K came up with this is beyond me. An ingenious invention, I fell in love with it straight off. The songs produced were so witty, Ravenclaw me!

8. First introduction to Hogwarts - Wonder, amazement, where's my letter Hogwarts?! The moving stairs, rooms which appear at will, an amazing buffet every night and the chance to learn so many incredible things. You'd have to be crazy not to want to be a student there!

7. Snape's loyalty - This actually broke me. I couldn't believe that after all this time Snape was actually good! That he loved Lily! Rowling's killing of Snape at the moment that Harry discovers this is heart-wrenchingly sad. I don't think I've recovered yet.

6. Fred and George Vs. Umbridge - Their farewell prank at Hogwarts is legendary. The fireworks and catherine wheels setting off all over the castle with havoc being wreaked everywhere. 'Peeves, give her hell!' Yeah, give her one from us lot too!

5. Harry and Ron Vs. The Whomping Willow - They so lost! That poor Ford Anglia. Loyal car though, it still came and saved them when they were almost munch for Aragog's not so little family.

4. Hermione trumping Umbridge - Hermione leading Umbridge into the forbidden forest where she is then carried off by menators. Ah, karma, wonderful thing! Let's be honest, we all wanted Umbridge gone way more than we wanted Voldemort dead.

3. Dobby being granted freedom by HP - 'Master has given Dobby a sock, Dobby is freeeee!' Awwww if a little elf didn't deserve it more!

2. The revelation between Harry & Sirius - I can't be the only one that shed a tear and whose heart swelled with hope when Sirius proposes a new life for Harry? Rowling was unbelievably cruel to snatch it away at the last moment! The hope that Harry would finally have a real, loving god father was just too much! I still haven't forgiven Rowling for ruining that... haha.

1. Encountering Dumbledore for the first time - HP and the Philosopher's (Sorcerer's) Stone: I loved this in the book and in the film! A wizard like no other that I had come across, my first reading of him was amazing. Eccentric, funny and seemingly down to earth, I loved Dumbledore right til the very end, despite the Dumbledore-bashing in Deathly Hallows.

That was a lot harder to narrow down to than expected!