Today is the 201st birthday of the great author, Charles Dickens. I felt it important to make a little blog post about such a great author. Before university my only association with this man had been through watching Oliver Twist on the television and The Muppet's Christmas Carol! My first experience with his work was rocky with Hard Times but massively improved with Great Expectations. The next book to be read will definitely be Little Dorrit. 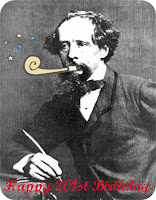 (Definitely had far too much fun making that haha).

Incredibly accomplished man! Many of his books are free for Kindle on Amazon or at least incredibly cheap :) everyone should definitely read at least one of his works in their lifetime!