Today I received an email showcasing the cover for the wonderful book published by Strange Chemistry; Zenn Scarlett by Christian Schoon. Check out this beautiful cover! 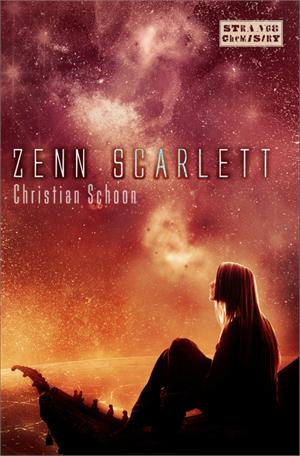 Zenn Scarlett is a bright and occasionally a-little-too-smart-for-her-own-good 17-year-old girl training hard to become an exoveterinarian. She specializes in the treatment of exotic alien life forms, mostly large and generally dangerous. Her novice year of training at the Ciscan Cloister Exovet Clinic on Mars was going well - until there are a series of inexplicable animal escapes from the school that Zenn finds herself blamed for. As if this isn't enough to be dealing with, her father vanishes under strange circumstances, and Zenn is worried that she has started hearing the thoughts of the creatures around her...
With the help of Liam, a towner boy, and Hamish, an alien bug also training at the clinic, Zenn must try to find her father, rescue the animals and unravel the mystery of who is behind the attacks on the school. And all without failing her first year.
I absolutely love it! It's due to be released in May 2013 by Strange Chemistry. The cover is beautiful and the story itself sounds amazing. This is the first I've heard of the book but it definitely has my interest :).
What do you guys think of the cover/synopsis?
xxx
Posted by Unknown at 16:10