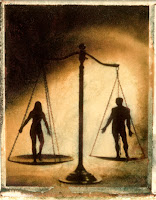 A few days ago I was debating with my boyfriend about the relevance of Feminism in the 21st Century. He argues that it is no longer needed and that the spectrum is slowly rotating so that the males will be in need of some form of 'Masculinism'. I, on the other hand, argue that Feminism is still relevant to today's society. I agree that some women/men parade under the title of 'Feminist' but are in fact sexist pigs - I'd go as far as to argue that they'd be on par or worse than the males which still believe that women are a species which come under the males. The term 'Feminism' is misunderstood by many in my opinion. Most picture a stereotypical feminist to be masculine-like in appearance (er, irony?), homosexual, angry, rough and to have a full hatred of men. The movement is to fight for equality, not to be above anyone else. Anyway, the point of this post is me gathering some viewpoints and opinions on what you guys think of feminism and the 21st century? What do you define it as? Is it still relevant to the Western world? Why?

I'm eager to write a blog report on this so any opinions would be incredibly helpful :).