Hi guys! I am soooo excited to host my first ever guest post and have to thank the wonderful Jennifer Selzer and Daniel Huber for allowing me to do this. Not too long ago, I requested to read their sci-fi/fantasy debut novel; Legend of the Chosen (Destiny's Kingdom 1) and I was so fascinated by the book that I had just had to learn more! The result of my curiosity is this fantastic guest post and the give-away coming very soon :). Before I hand the reigns over to Ms Selzer and Mr Huber, here is a summary of their wonderful book:

In the beginning the gods created evil


Left alone it grew vengeful
Angry, it sought to destroy all of existence
The Bethel galaxy is all that remains.

Bethel, the charmed central planet of the galaxy is on the brink of the year’s most anticipated event: the celebrated Twilight Bloom. Quade Decairus has no reason to believe that this year will be any different than those in the past: food and music, friends and the good cheer of those he loves the most. So why has he been plagued with nightmares of the end of his world coming on this very night?
Prophecies masked as legends. Impossible visions, bringing universal destruction. Only one man can seek those chosen to stop the evil and save them all.
In a world rich with magic and technology, a seamless blend of Fantasy and Sci-Fi, Destiny’s Kingdom explores Quade’s journey as he quests to save a galaxy that has always known peace and prosperity from a powerful evil only he can face.
Legend of the Chosen is book one in the Destiny’s Kingdom series.

"All she could think of now was the events of the previous day, all she kept hearing again and again in her mind was Quade's voice, all she kept seeing was the confused desperation that flashed in his eyes.

Guest post: Selzer and Huber on how it all began.

“How do you know what way is ‘up’ in space?”
This is a question I posed early on to Dan, my writing partner, when we first started really writing the more sci-fi scenes on our book, Destiny’s Kingdom: Legend of the Chosen. As a writer, things need to make sense to me, and this was something I needed to understand.
“Well, there is no up in space,” Dan would say and I’d give him a dubious look. “Your feet are down. The ceiling is up. But it doesn’t matter because there’s no gravity. So there really is no up or down.”
“So then, it’s safe to say there is no side-to-side.”
“Well, no not really.”
”Okay then, how come they always had so much turbulence on the Enterprise? Things were always flying around the bridge and people were falling. If there’s no gravity, and there is no up or down, then nobody’s coffee should ever spill and turbulence shouldn’t be an issue.”
This would follow with a huge scientific explanation as to how real space travel is different than TV and movie space travel and how we haven’t yet invented artificial gravity and how we’re currently standing on a spinning planet and yet not flying off it, right? And my eyes glaze over after about 30 seconds and then finally I just say, “Yeah, I don’t care anymore. What were the characters doing again?” 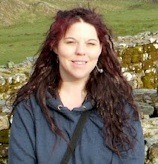 Writing is often seen as a solitary activity, and for most writers, I suppose that it is. In a writing team though, there’s a definite sense of partnership, not only in the responsibility for the story to be good and the characters to be special, but also for the work to impress the other person. And having a second pair of eyes and a sounding board to bounce off of is truly invaluable. For me, it’s all character. What does everyone look like, what are they eating, wearing, where do they live, what makes them tick? For Dan, his priority is plot and storyline, creating tension and movement. Left to my own devices, I’d describe the color green until you could taste it but that’s all you’d have and Dan would create an amazing story with no human spirit to flesh it out. I like to say that Dan builds the structure, and I do the decorating.

On a winter night in early 2000, Dan and I were driving back from Disneyland along with my oldest childhood friend. Disneyland always brings out the creative side of me, and I’d been chattering on about this story idea, Star Wars meets Shakespeare I called it. In the car that night, the discussion revolved around these two plucky, sort of forest nymphs that I wanted to call Echo and Mimic. They were messengers of the gods, one was gold, one was blue, but I didn’t have much more aside from that. And we were all bantering back and forth about how characters like this might work in the context of a story. Not too long after that, Dan and I had some long talks. We’d collaborated before on small things, writing contests and the like, and creatively, we worked well together. We decided if we were going to do this sci-fi fantasy story, we were going to go epic. We framed out our characters, drew maps of our galaxy, objects in it, places, rooms. We had long debates about characters and their relationships with each other. So that we could reference them later, we recorded our story meetings on a cassette recorder. And for over a year, we worked on this project that became Destiny’s Kingdom, the first book in the series, Legend of the Chosen. 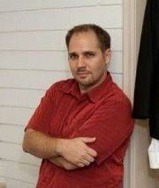 “So, how long is travel time between Bethel and P’cadia?” I ask Dan.
“I don’t know, twelve hours.”
“Hmm. Well, by the time he gets there, Quade’s gonna be really hungry.” Dan’s looking at me with a blank expression. “Seriously. He’s stressed out; he’s under a lot of pressure. He’ll be hungry, and tired. He didn’t get breakfast that morning, he went through that awful vision. Where’s he going to get some dinner?”
And after a debate about how “You don’t have to show the characters doing everything!” (that’s from Dan) to which I reply, “Yeah, but you can’t forget that they’re human and have to eat and sleep!” we compose a scene that fulfills the food requirement and also inserts some pretty cool plot elements in the process.

When we first started writing, Dan was in college, a Physics major, and Star Wars had been huge the year before. I’d always been more of a Trek fan, but I loved the idea of writing in another world. I didn’t want to be held to the confines of the world that we currently live in and always thought since we were starting from scratch, we could do what we wanted; Earth, idealized. I wanted this world to have inter-planetary travel, but I also wanted the beauty, the fantastical elements of magic and villages and horses. Fantasy, but without the endless walking journeys that for me, weigh down so many fantasy books. We wanted strong female characters that didn’t need to be rescued, and didn’t have to be horrible people to get what they want. When we’d go to the book store, so much of what we’d see were stories with a war-torn past or bleak dystopian future and we didn’t want that for our world. For over a year, we wrote and conceptualized, and compromised and debated. Toward the end of 2001 we had planned a month-long vacation to the UK and while traveling through Wales, at a lovely bunkhouse in Builth Wells, I finally wrote the last line in the novel.

And now, here we are with book two in the DK series, A Prophecy Revealed, coming out on 9/18/12 and we are not only writers, but publishers as well. It’s very empowering, finally being able to release these books in the manner that we’d always imagined. We’ve got a third book in the works in the Destiny’s Kingdom world, and another series of books planned, in a completely different genre, Urban Fantasy/Thriller. More than 12 years have passed since that ride home from Disneyland, and if you’d have told me then that we’d be where we are now, I might’ve had pause for a moment, but not for very long. I’ve always written, and Dan’s always created worlds and told stories. We’re both excited about what the future holds.

Legend of the Chosen giveaway!

Email ThisBlogThis!Share to TwitterShare to FacebookShare to Pinterest
Labels: daniel huber, give away, guest post, jennifer selzer, legend of the chosen